If I had to sum up my reaction to the film adaptation of Ender’s Game in a single, Simpsons-inspired word? Meh.

I suppose it shouldn’t come as much of a surprise that the film was underwhelming, any more than I should be surprised at how un-disappointed I was by this fact. I know there are many who, repulsed by Orson Scott Card’s homophobic rhetoric, want the film to bomb; I also suspect that there are many devoted fans of the novel who hoped (whatever their thoughts on Card’s politics) that the film would be a triumph. I myself am however quite satisfied at the fact that the film will likely pass from the public consciousness with nary a ripple, which is to my mind a more potent rebuke to Card’s anti-gay vitriol.

It is tempting to think that the novel is simply not amenable to adaptation, but there were enough high points in the film to suggest otherwise. The overarching problem is that, while generally well made and was at some points visually stunning, the whole exercise proved rather affectless. I can’t in all honesty lay that at the feet of the actors, either—there weren’t many weak points, and Asa Butterfield did as great a job as Ender as was possible, given the limited range of his material. In a cast comprised largely of children (or young adult) actors, this is no mean feat.

One of the novel’s crucial themes lies in the consideration of what makes a brilliant battle commander and, concomitantly, how to make a brilliant battle commander. Ender Wiggin, we learn at the outset, possesses the ideal genetic balance: intelligence, audacity, ruthlessness, charisma, imagination, and empathy. It is this last element that the novel teases out so brilliantly and the film completely botches—mainly because the novel demonstrates how Ender’s capacity for empathy develops, how it makes him understand his enemies, and how it brings him close to the brink of madness, in a series of well-developed sequences and encounters. The film, by contrast, chooses to elide most of those experiences in favour of having his adult keepers say repeatedly that his empathy makes him brilliant. The moment from the novel—replicated faithfully in the film—in which Ender makes this point explicit, confessing to his sister that his ability to love his enemy is what makes him so effective at destroying him, comes after a long series of protracted war games at the orbital Battle School. The film chooses to truncate those war games into a handful of scenes that are woefully inadequate in communicating Ender’s development as a commander.

It goes without saying that when adapting literature to film, a significant amount of the source material has to get left out. The secondary storyline in the novel about Ender’s siblings Peter and Valentine is entirely excised: Peter, so powerful a character in the novel, is reduced in the film to a few moments of screen time, enough to establish his violent and abusive tendencies. Valentine plays a larger role, though not by much—representative in the novel of Ender’s violent and empathic tendencies, they become little more than ciphers in the film. That being said, it was not this elision that marred the film, but the lack of any sense at all of Ender’s development as a commander: his adaptive abilities, his overcoming of the various stigma he’s given, earning the trust and loyalty of his soldiers, and above all the increasing isolation he suffers as his reputation and authority grows.

And honestly, it would not have taken much to correct this lack. I don’t often argue for films to be longer, but they could have easily added fifteen or twenty minutes to Ender’s Game—especially considering that that extra time would have mostly been devoted to the Battle Room, a zero-G environment in which the recruits learn and practice tactics in the fighting of mock battles. Few people who have read the novel would dispute that the Battle Room is Orson Scott Card’s greatest imaginative creation—to the point where the novel has been put on a variety of military school or officer training curricula in the U.S. It is here that Ender proves his mettle, as Colonel Graff, the commandant of Battle School (played by a satisfyingly gruff Harrison Ford in the film), sends him into battle against increasingly ridiculous odds.

Rendering the Battle Room cinematically was always going to be the most challenging dimension of adapting the novel, and the filmmakers did a superb job—which makes it doubly frustrating that we don’t have much action unfold here. The cinematography captured the dizziness and vertigo that I have to imagine would afflict anyone in zero-G.

But again, we don’t get enough of Ender’s development, which I would argue is crucial to the story. Everything that follows after he leaves Battle School for Command School is rooted in the lessons he learns there, and the profound ambivalence he develops for his own talent. What makes Ender’s Game such a good novel is its refusal to glorify violence and warfare, which is not to say the battle sequences aren’t thrilling to read. Even (or perhaps especially) the mock warfare of the Battle Room, however, takes a constant toll on Ender physically, emotionally, and psychologically. At the same time, we see the machinations of the military as they manipulate Ender and his fellow recruits, changing the rules of the game on the fly, moving the goalposts, selectively isolating or tormenting (or lauding) their charges, like a huge, elaborate psychological experiment. When some of the officers have scruples, others acknowledge the monstrosity of their project—and, if they are to defeat the alien threat, its necessity. In the novel, Colonel Graff resigns himself to facing charges of war crimes … if they win the war. In the film he phrases it more bluntly, barking at his adjutant that destroying Ender psychologically will matter not at all if they’re all exterminated by the aliens.

Ender’s Game, in this respect, functions as an extended ethical debate: what cost survival? The final bait-and-switch, in which Ender destroys the aliens’ home world while under the illusion that he is playing just one more training simulation, carries so much more force in the novel precisely because we have been witness to his ambivalence and anxiety about his own monstrosity. In the end he becomes a monster in spite of his ambivalence—that he has that decision taken away from him (or that he’s encouraged to make it under false pretenses) is the final, most egregious injury dealt him by those in command. In the film however, in spite of some powerful acting by Asa Butterfield, the emotional impact of the “reveal” (to say nothing of its surprise) is fundamentally subverted. 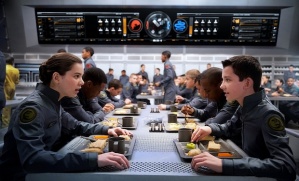 There have been a number of reviews of the film and commentaries of the novel apropos of the film’s release puzzling over this central question of empathy. Most crucially, a lot of reviewers and critics have expressed a frustrating cognitive dissonance between a novel that celebrates Ender’s capacity for empathy with an alien species, and its author, who seems incapable of similar empathy for certain fellow humans. What do we make of that? I raised this question last winter when I taught Ender’s Game in a third-year SF class, and I also asked how we deal with a novel whose author expresses a hateful worldview and advocates criminalizing a sexual lifestyle practised between consenting adults. I’m not really any closer to answering that question now than I was then. An obvious approach would be, as a significant number of people have advocated, boycotting his works (and also this film, which obviously I did not do). It poses a knotty question: do I teach Ender’s Game again? (I had put it on my SF course’s reading list before discovering the full extent of Card’s political activism). I’m loath to put more money in his pockets, something requiring thirty-odd students to buy his novel would do. But as I hope this review has made clear, Ender’s Game is a fantastic book to teach, precisely because of its ethical dimensions.

A recent article by Jonathan Rauch made what I thought was an excellent point: that screeds like Orson Scott Card’s various fulminations against gays and the “gay agenda” might rouse the homophobic passions of a few, but more and more—as LGBT individuals become increasingly visible, vocal, and heterosexual anxiety becomes thus increasingly allayed—such intemperate assertions are recognized for what they are, paranoid and ludicrous hate. As Rauch writes:

Some of the things [Card] has said are execrable. He wrote in 2004 that when gay marriage is allowed, “society will bend all its efforts to seize upon any hint of homosexuality in our young people and encourage it.” That was not quite a flat reiteration of the ancient lie that homosexuals seduce and recruit children—the homophobic equivalent of the anti-Semitic blood libel—but it is about as close as anyone dares to come today.

Fortunately, Card’s claim is false. Better still, it is preposterous. Most fair-minded people who read his screeds will see that they are not proper arguments at all, but merely ill-tempered reflexes. When Card puts his stuff out there, he makes us look good by comparison. The more he talks, and the more we talk, the better we sound.

Considering Rauch’s words, I have to wonder if the controversy over Ender’s Game isn’t perhaps something of a gift—both for the cause of forwarding gay rights, and for those of us who teach these sort of things in the classroom. The thought of putting money in Card’s pocket makes me vaguely ill, but I also cannot deny that whatever his politics, the man wrote a damn good novel … and that however much money I make for him putting it on a course (anyone know the percentage the average author gets in royalties? Times about $12 for the paperback, times, say, thirty-five students?), I have to hope that raising these issues in the classroom more than outweighs the mischief he can do with the $65 dollars or so my class would earn him.

Perhaps I’ll even show clips from the film.