Isolated Thoughts: Conspiracy Corner—The China Syndrome (no, not the movie) 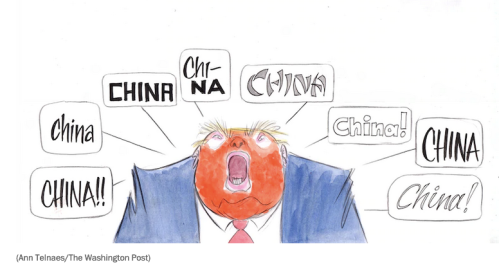 I learned a new term this morning as I listened to the most recent episode of “Pod Save the World,” one of the many excellent podcasts by Crooked Media. It is hosted by Tommy Vietor and Ben Rhodes, both of whom worked for Barack Obama’s foreign policy team, Vietor as the National Security Spokesman, Rhodes as Obama’s head foreign policy speechwriter (Rhodes’ memoir of his time in the Obama Administration, The World as it Is, is an excellent read). Speaking of recent reporting that Trump and his lackeys are pressuring intelligence officials to find evidence that COVID-19 was produced in the oft-mentioned infectious diseases lab in Wuhan, China, Vietor called this “conclusion shopping,” which describes an effort find—or, ultimately, manufacture—evidence that will support an already-assumed conclusion. They offered the example of, say, the conclusion being that Iraq must be invaded … or in this case, the conclusion that the novel coronavirus was entirely China’s fault, and quite probably not accidental.

One of the things I find particularly depressing about the present moment generally, and about this issue specifically, is that Trump et al are making absolutely no pretense about this: Trump needs an enemy he can berate and point to and tell his base they’re the reason your life sucks, and he does it with all the subtlety of a carnival barker because he knows that Fox News and the rest of the conservative noise machine will take up the refrain and that a rump of the American population—his MAGA-hat wearing base—will unquestioningly believe him over anyone whose job it is to know better. Conclusion-shopping is easier when your supporters will accept your conclusion unquestioningly, and be indifferent to whatever evidence you present, except as talking-points to be shouted. The Bush Administration at least attempted subterfuge, using the trauma of 9/11 to paper over the inconsistencies in the charge that Saddam Hussein was involved, and planting stories that were picked up by useful idiots like Judith Miller at the New York Times, creating a narrative that did not hold together if you looked closely, but which was convincing enough that a plurality of Democrats in Congress—including Hilary Clinton and Joe Biden—voted in favour of invading Iraq.

It didn’t take long for the subterfuge to be exposed, but by then the die was cast, and Bush and his people were singularly unapologetic. At the time I was fond of being ironically nostalgic for Watergate and Iran-Contra, in which Nixon and Reagan’s elaborate cover-ups at least hinted at a measure of shame. Never in a million years could I have imagined a presidential administration that would be more shameless than Bush et al … but here we are.

(Also, as an aside: as much as I appreciate the sentiment of George W. Bush’s recent paean to solidarity in the face of adversity, let’s not get nostalgic for a president whose deliberate, calculated mendacity not only precipitated a disastrous and unnecessary war, but whose tactics in doing so laid the groundwork for where we are now. By all means, enjoy the schadenfreude of Trump’s unhinged Twitter response to Bush’s anodyne call for unity, but don’t for a second let Bush off the hook for being at least partially responsible for where we are now).

The problem Trump has now in bashing an enemy is that it is difficult to fit his usual suspects—the media, the elites, the Establishment, immigrants—with the black hat, because not only does a virus not discriminate in who it infects, its effects are plainly visible and cannot be spun. Nor, for that matter, can the incoherent ramblings of his press briefings and his painfully obvious lack of empathy. Until now, red states have been spared the worst of the pandemic, but that is changing as governors like Brian Kemp of Georgia and Ron DeSantis of Florida charge onward to re-open their states well ahead of the advice of medical experts.

So Trump needs a new enemy, and has signaled that it will be China. I don’t for a moment want to be an apologist for Xi Jinping and his dictatorial regime, nor do I want to downplay the unavoidable fact that the regime’s reflexively secretive and oppressive tendencies exacerbated an outbreak that more an honest and transparent response would have, at very least, ameliorated. But then, criticism of Xi’s regime isn’t the ultimate point of Trump’s current conclusion-shopping; if it was, we might have a more nuanced discussion about authoritarian versus democratic responses to such a crisis. The ultimate point isn’t to place blame on a system of governance, but a non-white ethnicity—which is why you’re likely to see a confusion of conspiracy theories about the collective malevolence of a technocratic dictatorship conflated with racist depictions of backward, bat-eating Chinese peasantry. The fact that these two elements are obviously at odds hasn’t mattered, nor will it going forward. The narrative, such as it is, given Trump &co.’s utter shamelessness, is painfully predictable: China is America’s implacable enemy, and ruthless, so the virus was almost certainly created in this Wuhan lab and released to cause a debilitating global pandemic; also, Chinese people are culturally other, and have backward social practices (they eat bats! At “wet markets” no less, and doesn’t that just sound disgusting?); then, Joe Biden will be hammered in ad after ad, and Fox News piece after Fox News piece, for being “soft” on China, and Hunter Biden’s questionable financial dealings in China will be held up as evidence of his and his father’s corruption. Ad nauseum.

Of course, this all isn’t a prediction: it had already happened, it is still happening, and it will continue to happen, with the only difference being the volume as we go forward.

As with any conspiracy theory, none of this needs corroboration or even a logical through-line. Already there have been countless conservative op-eds and think pieces attacking liberal objections to this narrative, characterizing the response as mealy-mouthed political correctness and identity politics more concerned with ostensible racism than the hard facts on the ground. Why shouldn’t Mike Pompeo insist on calling it the “Wuhan virus”? That is where it originated, after all! China has been the epicenter of many outbreaks! You libtards are more worried about offending people than with solving problems! … and so on.

One of the key reasons for objecting to designating COVID-19 as a “Wuhan” or “Chinese” virus isn’t because it didn’t originate there—because of course it manifestly did—but because such characterizations are (a) counterproductive in the diplomatic realm, where China, like it or not, is a key player—especially now, with a feckless and incompetent U.S. president who has effectively abdicated America from its usual role in global crisis management—and (b) because those making the objection are doing so in recognition that the designation is, more often than not, being made in bad faith by individuals more interested in assigning blame than finding solutions. Did the virus originate in China? Yes. Does that implicate Chinese (and thus by extension in the white imagination, all Asian) people? Of course not. But that is what happens, as we have seen in the uptick of anti-Asian hate crimes perpetrated in the U.S. and elsewhere.

One of the ironies at work here is that a scenario in which a tech at the Wuhan lab got infected, or there was an error made in the disposal of hazardous waste, is entirely plausible. (Trust me when I say you do not want to, even casually, look up info on human error in research labs, not if you want to sleep well). Thus far, intelligence officials and medical investigators have said this was unlikely, that the outbreak probably did occur because of zoonotic transmission.  But if the outbreak did occur because of human error? Well, blame the error, and perhaps safety protocols. This is why medical research of this nature and pandemic prevention tends to be international in character—to have as many expert eyes on things as possible, something denuded by the Trump Administration’s firing of their representative in Beijing. The problem with Trump’s conclusion-shopping is that it is basically conspiracy-shopping—all he needs is the slightest hint that it may have been the lab’s fault for his enablers and supporters to go all in on the assumption that the virus was specifically manufactured as a bio-weapon.

And hey, did you hear? Joe Biden is in league with them.