If you were looking for a useful summary of where American fiscal priorities lie, you could do worse than the recent flyovers performed by the Navy’s Blue Angels and the Air Force’s Thunderbirds.

On April 28, the two elite fighter wings did routines over New York City, Newark, Trenton, and Philadelphia. They started at noon with NYC, and finished with Philadelphia just after 2pm. The entire point of the exercise was to pay tribute to healthcare workers, first responders, and other essential workers putting themselves in danger of infection.

This completely unnecessary display was monumentally idiotic for a variety of reasons, not the least of which was that it would either be lost on people practicing self-isolation, or, worse—as predictably happened—it would lead people to flout social distancing guidelines in order to go out and see the show. 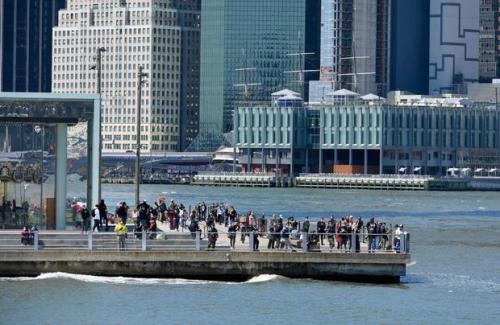 I get that it is important to find ways to keep people’s morale up in this difficult time, especially those who put themselves at risk. And while I’m sure healthcare workers appreciate the daily rounds of applause from New Yorkers, I’m doubly sure they’d appreciate more the resources and the funds necessary for doing their jobs safely and effectively. Being called “hero” isn’t a sufficient substitute for proper PPE, or, in the case of food service and grocery workers, a living wage.

If we take the calculation a step further: the fly-away cost of an F/A-18 Superhornet is $70M. The Thunderbirds’ F-16s are a much better deal at $19M apiece, but that still makes for over half a billion dollars worth of hardware flying in formation, paying tribute to people who almost certainly wish that kind of money would be spent on ventilators, or going to ameliorate the hospital bills of the uninsured, or supplementing the income of those stocking shelves and delivering food.

The other day featured a whole bunch of headlines in my news feed announcing that the total number of deaths in the U.S. due to COVID-19 had exceeded the number of American deaths in Vietnam. And a traitorous, sneering voice in my mind I can never quite root out snarked, “Well, at least the Vietnam War was good for the economy.” I’m not proud of having that thought, but it seems germane here: for a nation that tends to cry “socialism!” when Democrats try to increase funding for food stamps or talk about universal health care, there is a broad and blithe acceptance on both sides of the aisle for mind-numbing military budgets, and I find it baffling that nobody seems outraged at the expense of sending two aviation teams into the skies above the tri-state area as a tribute to people dealing with significant equipment shortages.

Meanwhile, we have been treated on almost a daily basis to another example of priorities as Fox News and right-wing astroturf groups beat the drum for ending the lockdown.

To be certain, there is a serious and important discussion to be had about the deleterious effects that quarantining has had on people’s mental health, and the fact that the shuttering of the economy is hurting many, many people in ways both physical and psychological. Too often, however, that point is being made in bad faith as an argument to “re-open the economy.” If you’re going to point to the erosion of people’s mental health, then you also need to address how we improve treatment and access to resources going forward in ways that move beyond simply getting back to work. 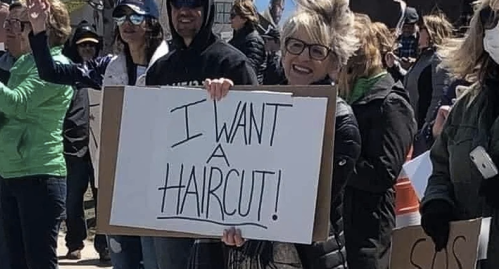 But again, priorities: I couldn’t help but notice that the vast majority of complaints the anti-lockdown protesters in Michigan and elsewhere were making betrayed their privilege: “I want a haircut!” read one sign, and someone else complained that he wasn’t able to buy grass seed for his lawn. Other people complained about the stupidity of the rule that prevented them from traveling to their second in-state property. I will agree that this last provision seems odd, but then again, if your biggest problem is getting to your second house, you’re not suffering all that much. I might have had more sympathy with the protests if the general sense expressed was “I need to get back to work!”, but what was being said was more along the lines of “I need OTHER people to get back to work!”—to cut hair, sell grass seed, and so forth.

What lives are valued? The way in which the “need” to re-open the economy has been framed has largely been a question of what comprises acceptable losses. The earliest voices making this case characterized it in terms of patriotic sacrifice. Texas’ Lt. Governor Dan Patrick, appearing on Tucker Carlson’s show on Fox News, declared that grandparents should be willing to die from the virus if need be, if it means getting the economy humming again. He said to Carlson, “No one reached out to me and said, ‘As a senior citizen, are you willing to take a chance on your survival in exchange for keeping the America that all Americans love for your children and grandchildren?’ And if that’s the exchange, I’m all in.” Another voice joining the chorus was none other than Glenn Beck, who said on his radio show—or possibly podcast, I’m not sure of his platform—that at fifty-six years old, he was right on the edge of the “danger zone,” but that he was willing to put himself at risk to help jump-start the economy. “I would rather have my children stay home and all of us who are over 50 go in and keep this economy going and working,” he declared. “Even if we all get sick, I’d rather die than kill the country, because it’s not the economy that’s dying, it’s the country.”

Very noble sentiments, to be sure, or they would be if the first wasn’t coming from a politician with a gold-plated health plan and the latter from a man whose actual job entails yelling into a microphone in his home studio—not exactly an occupation that puts you at a high risk of infection. Both of them have the option of working from home; like the people protesting in Michigan about haircuts and grass seed, it’s not their right to work that animates their rhetoric so much as their perceived right to have other people work for their benefit. “Re-opening” the economy will not put the affluent at risk, but the workers.

As a popular meme that has made the rounds lately says, with mock disingenuity, “It’s almost as if it’s the workers who create value. Huh. Someone should write a book about that.”

But all that is at least partly beside the point I want to make. The very idea that it is acceptable to sacrifice the elderly and the infirm in the name of economic stability isn’t just pernicious and cruel, it’s also wildly inconsistent with past conservative hysterias. Glenn Beck might opine that the elderly are expendable in the name of the greater good now, but ten years ago he was one of the people screaming bloody murder at the fiction that the Affordable Care Act would necessitate “death panels” to rule on who would receive health care and who would not. Remember that fun time? It was all scare-tactic bullshit of course, but the premise was that expanding health coverage would lead to a shortage of available care, which would have to be rationed by cruel government factotums—the aforementioned death panels—based on who was a worthwhile subject, and who was a lost cause. In this case, there was no suggestion that the elderly and infirm sacrifice themselves for universal health care, but rather that they would be brutally culled by lefty ideologues. Or as Beck pithily put it on his bananapants Fox show, “Night night, Granny!” 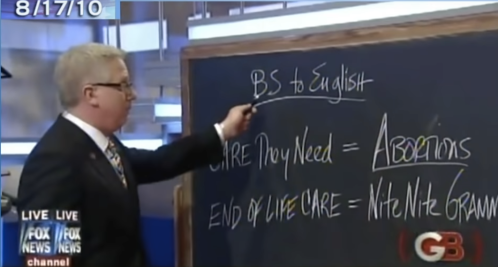 All of this is by way of making the obvious point that what qualifies as “acceptable losses” tends to conform to one’s priorities. In the name of universal health care? Stalinism! In the name of a stable stock market? Not just acceptable, but indeed noble and patriotic! (Of course, this contrast is itself a fallacy, as the prospective holocaust of the elderly under Obamacare was always already a fiction invented by Republicans).  Remember when Dick Cheney defended the egregious rollbacks of civil liberties in the Patriot Act, saying that even one single death due to terrorism was too many?

Mind you, as I pointed out in a recent post, one of the Bush Administration’s strategy’s for defeating the terrorists was to keep shopping. The nostalgia for the volunteerism and sacrifice of the Greatest Generation in Max Brooks’ World War Z is more and more attractive … not least because in Brooks’ imagined future, all jet fighters are mothballed because they consume too much fuel and are too expensive to use. Just a thought for the present moment.