I’d been wracking my brain trying to figure out how to theme the fourth-year contemporary American literature seminar I’m teaching in the Fall, when I realized the obvious topic was right in front of me: Pandemic Fiction! Having taught a course a few years ago on post-apocalyptic narratives, I already had a handful of titles under my belt. A quick internet search yielded an embarrassment of riches, and I put in an online order for some that seemed likely candidates. 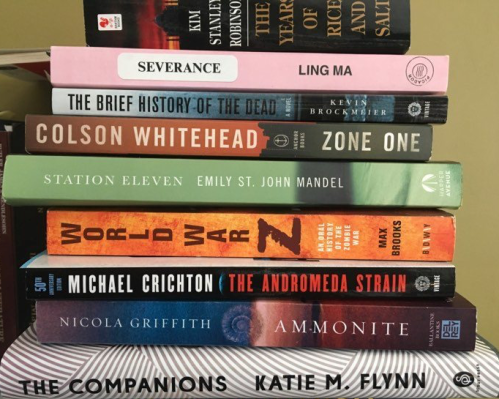 When I mentioned on Facebook that I’d decided on pandemic fiction for my course, the response was pretty uniformly enthusiastic. Some people asked me to post the reading list when I’d finalized it; a few others, some of them former students, wistfully said that would be a course they’d love to take. And more than one person said it would likely be a course that would draw in a lot of students.

I think it will, but I also think there will be a not-insignificant number of students who will, as I commented back, “avoid it like the plague.” (The bad joke was unintentional, but apt). For everyone who might welcome the perspective a course on pandemic fiction might offer on our current moment, I’m sure are those who would much rather not either revisit the coronavirus experience or deal with such fictionalizations during an ongoing crisis (fingers crossed pretty damn hard for the first eventuality).

It’s an odd quirk of human idiosyncrasies that some of us lean into fictional figurations of crisis in response to the experience of a real one, while others most emphatically do not. It makes me think of the way in which, after September 11th, Clear Channel distributed a memo to all its radio stations listing the songs they were to avoid playing because they might evoke thoughts of the attack (including some truly bizarre choices, like “We Gotta Get Out of this Place,” or risible ones, like “Walk Like An Egyptian”), and movie studios froze production or postponed release of films depicting terrorism or large-scale destruction; meanwhile, video stores (remember those?) reported that movies like Armageddon and Independence Day were constantly being rented. In the present moment, one of the highest-trending offerings on Netflix has consistently been Contagion, Stephen Soderbergh’s 2010 film about a pandemic. I have seen a significant number of discussions of this sort of thing on social media, i.e. people soliciting pandemic/apocalypse/dystopian themed isolation viewing, as well as people voicing incredulity that anyone would want to watch or read such stuff in the present moment.

I suppose it doesn’t come as a great galloping shock that I fall into the former category, and not just because I need to read a bunch of titles and make final reading list decisions before the call comes from the English Department to submit our book orders for the Fall (usually, that happens early-mid May). Speaking personally, it’s not the fictional representations of pandemic that bother my soul, but the daily news that makes me afraid for my blood pressure. As I mentioned in my initial “isolated thoughts” post, what narrative tends to offer is catharsis; it is, to paraphrase Fredric Jameson (my copy of The Political Unconscious is currently in my campus office and thus inaccessible), the symbolic resolution of irreconcilable real-world contradictions … even when that resolution entails something putatively negative, like a pair of sclerotic old men in a Beckett play, or the wholesale destruction of society in a zombie apocalypse.

In the latter, at least you might get to use a crossbow.