Three reflections on the occasion of Remembrance Day

Last week in my fourth-year seminar, we covered Tim O’Brien’s book The Things They Carried—a not-quite-a-novel, not-quite-a-memoir about his experiences as a combat soldier in the Vietnam War. It’s an extraordinary piece of work that I recommend to everyone. I prefaced our discussion as I always do whenever I teach a text about war, with an anecdote about James Joyce living in Zurich during the First World War: when asked why his current project (which was to be an obscure little novel titled Ulysses) wasn’t an explicitly anti-war novel—Joyce was, after all, living in the middle of a community of vociferously anti-war artists who had come to Zurich specifically to avoid military service—Joyce responded that the best way to write an anti-war novel was simply “don’t write a novel about war.”

I have always been struck by the simultaneous wisdom and inadequacy of this zen-like assertion. On one hand, Joyce identifies the principal problem of depicting warfare, which is that in aestheticizing it you risk celebrating it. To illustrate this point, I showed my class the notorious helicopter attack scene in Apocalypse Now, in which Robert Duvall’s sociopathic Colonel Kilgore swoops in with his air cavalry on a Vietnamese village to the strains of “The Ride of the Valkyries,” a mission he’d rejected until one of his soldiers told him the beach there was perfect for surfing. The scene is part and parcel with the film as a whole, a commentary on the absurdities and psychopathies of warfare; in and of itself, however, it is one of the most thrilling depictions of combat ever put on celluloid, a point made strikingly in the film adaptation of Anthony Swofford’s memoir of the first Gulf War, Jarhead. When Swofford’s Marine unit is given its orders to ship out to the Middle East, they get the men’s bloodlust up by showing them Apocalypse Now:

The moment is iconic: the shirtless Kilgore, wearing a traditional cavalry hat, crouches down beside Captain Willard (Martin Sheen), who, with a handful of other soldiers, lies prone as bullets snap and whiz about them; Kilgore, heedless or perhaps oblivious of the danger, regretfully tells Willard, “This war’s gonna end one day.” Then he stands and walks off. 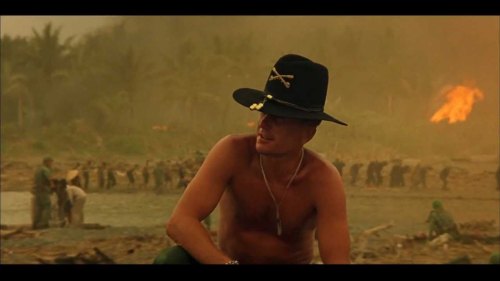 As I said, the moment is iconic, but almost certainly for all the wrong reasons. We’re not meant to identify with Kilgore, but with the soldiers cowering on the ground. Between Francis Ford Coppola’s direction and Duvall’s performance, however, Kilgore has become a compelling symbol of badassery, and his iconic line a celebration of warfare.

I’m here today because my grandfather was good at math

My maternal grandfather, Norman Brown, was one of the kindest, gentlest, and most intelligent people I’ve ever known. He never went to university because he had to work as soon as he was done school to help support his family, which was something of a minor tragedy—if there was ever anyone who would have loved academe and flourished within its ivied walls, it was my grandfather. Even without postsecondary education, however, he showed his acumen, winning an award in mathematics. When World War Two began, he volunteered for the Royal Canadian Air Force, and became a navigator on Lancaster bombers.

I remember him showing me the various ways in which he would figure out the location of his bomber. He’d pull out pads of graph paper and draw lines with a pencil and ruler, writing numbers in the margin, and show me how to calculate one’s position. All that was lost on me, and would almost certainly be lost on me today, but I loved him so much, and loved listening to his stories, that my grasp of his words was beside the point.

I was a devoted reader of WWII history from an early age, and would have loved even more to hear stories about his bombing missions over France and Germany. But he had none to tell. He never shipped overseas. He was so good and so precise in his navigation that he was kept in Canada to teach others. (My grandfather, modest to a fault, never said as much; it was my grandmother who told me, recounting how, upon receiving his letter with the news, she wept with relief).

The fact that my grandfather had no actual war stories to share was, to my young self, the sole element lacking in those discussions. It would only be much later, after he had passed, that I fully appreciated the substance of my grandmother’s relief. Bomber crews sustained one of the highest rates of attrition of any combat units of the war. Some forty-five percent of bomber crews were killed in the skies over Europe. That’s a number that gives me what I can only characterize as existential vertigo. Had my grandfather been just decent at math as opposed to extraordinary, there’s close to a fifty-fifty chance I would not be sitting here writing this post.

And as I write this, another eventuality presents itself to me: had he gone overseas and survived, would he have been the same man I loved and idolized? After suffering the trauma and terrors of night-time bombing, seeing crewmates chewed by flak, looking death in the face, seeing the bombers on his wing explode in flame, would that gentleness of spirit have survived?

“Thank you for your service” is the emptiest of sentiments if we’re not going to acknowledge that sometimes the greatest sacrifice is surviving.

Almost eighteen years ago, I went to a bar in London, Ontario with a good friend to watch Team Canada play Finland the Salt Lake City Olympic hockey quarterfinals. Canada won, and went on to take the gold. That evening sticks in my memory because there were two things that struck my friend and I as the quintessence of Canada.

First was a young Sikh man in a turban and a Toronto Maple Leafs hockey jersey; where the player name would be, it said THE HIP. He was with a group of racially and ethnically diverse friends, all cheering exuberantly for Team Canada.

Second was a moment between periods featuring Don Cherry declaiming in his usual strident tones about the game thus far. He was rinkside; a group of Canadians who had made their way to Salt Lake City started cheering and chanting his name, loudly enough that they were drowning him out. Annoyed, Cherry turned and pointed at them and said “Shut up!” And they did. Everyone in the bar burst out laughing, because of course Canadians, however excited to be watching their team hand Finland its ass, would be polite enough to be chagrined to have their rambunctious behaviour called out.

It has been quite awhile since I thought of that evening, but it came to mind today when I read and then watched Don Cherry’s asinine suggestion that what he perceived as a dearth of Remembrance Day poppies on the streets of Mississauga and Toronto was attributable to a surfeit of immigrants disrespecting Canadian traditions and history:

Don Cherry might be a Canadian institution, but he has been descending into the nativist know-nothing reactionary well for some time now—or, more likely, has always been there and finds the present moment amenable to voicing his antipathy to anyone he perceives as not being a “real” Canadian.

I don’t know that his anti-immigrant comments regarding wearing the poppy are the worst thing he’s said in recent years, but they do serve to exemplify the kind of pernicious nativist thinking that has consumed contemporary conservatism. On the day we put aside to solemnly observe the sacrifice of our nation’s soldiers, it’s worth considering just why Cherry’s rant was not merely asinine and bigoted, but also displayed precisely the kind of ignorance and disrespect of history of which he accuses immigrants.

To start with, I’ve written at some length on this blog about how the assertion that Canadian soldiers fought and died “for our freedoms” irks me. Click the links to read my thoughts in full, but here’s the TL;DR: Canada has never faced existential threat from a foreign foe, whether from the Central Powers or the Axis or North Korea or Saddam Hussein or the Taliban; we have fought for the freedoms of others, which should be celebrated and memorialized, but that is not the same thing; and to unthinkingly celebrate our soldiers’ sacrifice and our veterans’ service without understanding its context and complexity is to do it a disservice.

That is why I wear the poppy, while some on my section of the ideological spectrum consider it an endorsement of war and aggression. I understand that argument while respectfully disagreeing; as I outlined in the first section of this post, the depiction of war is a fraught affair—so too is its commemoration, not least because while November 11th invites us to remember all who have fought for and served Canada, the day specifically honours the First World War.

Given that I’m a third-generation Canadian of predominantly British heritage (with just enough Irish mixed in to sharpen my Catholic guilt), the legacy of WWI resonates with me quite strongly. But I can’t blame people whose families emigrated from formerly colonial nations if they’re ambivalent about commemorating a war that was fought by imperial powers over imperial holdings. There was a host of reasons for the tensions in Europe leading up to the outbreak of war, but a major factor was Germany’s imperial expansion, encroaching as it did on French and British interests in Africa and Southeast Asia. WWI was, as I’ve argued here before, an entirely unnecessary conflagration contested by imperial and generally nondemocratic powers in the name of keeping possession of their colonial interests.

Which is not, I hasten to add, a reason for not commemorating the horrific sacrifice made by soldiers fighting for what poet Wilfred Owen called “the old lie: / Dulce et decorum est / Pro patria mori” (translation: “It is a proper and beautiful thing to die for one’s country”). And the particular idiocy of Don Cherry and his ilk omits how many of “you people’s” forebears fought for and alongside the imperial powers: by conservative estimates, “well over four million non-white men were mobilised into the European and American armies during the First World War, in combatant and non-combatant roles.” (Just going out on a limb here that the “you people” Cherry’s targeting aren’t Swedish immigrants). To say nothing of the significant number of indigenous Canadians who fought in both world wars, to no great benefit to their communities.

Commemoration and memorializing are important, but even more important is having a nuanced appreciation of history. When we boil it down to the mere presence or absence of a flag pin or a poppy on one’s lapel, it is profoundly disrespectful to the very people we’re ostensibly remembering.