Thoughts on D-Day and Generational Memory

When Tom Lehrer was asked why he quit doing political satire, he famously quipped, “Because Henry Kissinger won the Nobel Peace Prize.” Translation: where do you go from there? What kind of parody or satire can rise to the level of the architect of Pinochet’s coup in Chile and the secret bombing of Laos and Cambodia being lauded as a peacemaker?

If the years since Lehrer’s quip have taught us anything, it’s that metaphors of bars being lowered and new depths being plumbed no longer work. There is no bottom, and new normals will always provide a basis for ironic, satirical critique—even if that critique comes to feel more and more like affectless laughter in the dark. Since Kissinger’s peace prize, a B-movie actor was elected president, a subsequent president was essentially impeached for getting a blowjob, and the Terminator was elected governor of California … and that only brings us up to 2003. The fact that a critical mass of liberals would probably be happy to swap Donald Trump for either Reagan or Schwarzenegger both speaks to the fact that they had depths belied by the prior entertainment careers, but also how far down the political slope arse-first we’ve slid.

(Just as an aside: I will maintain to my dying day that Saturday Night Live missed a golden comedic opportunity when, apropos of Schwarzenegger’s re-election campaign, they did not stage a skit in which the Governator debated political opponents Sylvester Stallone and Jean-Claude van Damme). 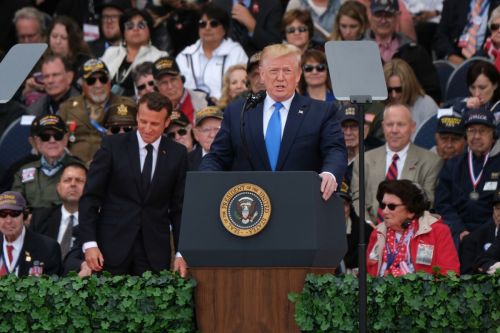 All of this is by way of saying that, if Kissinger’s peace prize was what drove Tom Lehrer out of political satire, I wonder what he makes of the spectacle of President Donald Trump, he of the bone spurs and dictator-envy, speaking solemn words on the 75th anniversary of the D-Day landings. The layers of irony are thicker than the Burgess Shale: a president whose slogan “America First” was originally used by isolationists and Nazi sympathizers like Charles Lindbergh, who wanted to keep the U.S. out of the war; a president who has consistently attacked NATO and the European Union, both of which were established with the express purpose of preventing another war in Europe; a president who has refused to condemn neo-Nazis and white nationalists, and whose presidency has indeed proved to be a clarion call emboldening the racist and anti-Semitic right; a president whose racist populism has been mirrored in the rise of comparable alt-right groups in France, Germany, Hungary, Poland, and in the viler strains of Brexit rhetoric; a president who loves the idea of military thuggery but seems incapable of recognizing honour and sacrifice, who is so thin-skinned that his aides panicked at the thought of him seeing the name “John McCain” on a ship or its sailors’ uniforms; a president who is even now poised to pardon actual war criminals; a president who, sitting mere feet away from the graves of American war dead, petulantly smears the name of Robert Mueller, a decorated veteran; this president recites the prayer delivered on D-Day by Franklin Roosevelt—a president whose legacy is the antithesis of everything Trump embodies—and speaks some boilerplate platitudes before returning to his golf course in Ireland.

I used to get outraged at George W. Bush’s blithe ignorance, but that was before I knew what was coming: first Sarah Palin as a potential VP, but then Trump himself, someone not just ignorant but functionally illiterate. I’m hardly a monarchist, but I do admire Queen Elizabeth’s capacity to deliver a diplomatic fuck-you, as she did in her choice of gift for Trump: a first edition of Winston Churchill’s history of WWII, something entirely appropriate for the occasion, but also painfully discordant with this president’s aggressive, ahistorical ignorance. Back in the halcyon days of late 2016, such a gift might have encouraged the naively optimistic—those poor souls who fervently wanted to believe that assuming the office would transform Trump—to hope that Trump would read and learn. But that was then and this is now, and so the subtler insult of the gift—the Queen gave him the abridged edition—is lost in the mere fact that simply giving Trump a book, any book, is to draw attention not just to the fact that he doesn’t read, but to his arrogant incuriosity. The Queen could have given him a boxed set of the Harry Potter series and made the same point.

The Queen’s gift and the insult it delivers, sadly, is a potent symbol for the present moment, in which the felt history of WWII and its transformative effects on the 20th century have become abstract and mythologized. I teach a class on American literature after 1945, and I always begin with a lecture on the sea-change wrought by the Second World War. I ask my students: where do you think the U.S. military ranked, globally, in size and strength in 1939? My students are astute enough to recognize that, if I’m asking the question, there’s a trick in there somewhere. But they’ve also grown up in a world in which American military might is indomitable, and if they know anything about WWII, it’s probably through movies like Saving Private Ryan that depict the vastness of the U.S. war machine. So … Fourth? they say, tentatively. Fifth? A more audacious student might suggest tenth.

No, I reply. Nineteenth. And by 1945, a scant four years after Pearl Harbor, they were rivaled only by the Soviet Union. And then went the way of the rest of the century. Without a grasp of the war at mid-century, one cannot properly understand what came next, and indeed what is happening today.

D-Day occurred 75 years ago, which means that the youngest person who stormed those beaches or parachuted in behind German lines would be 93 years old today (assuming they didn’t lie about their age). We’re on the cusp of losing the last of the Greatest Generation, and when the last of those people die, so too does the generational memory they carry. We’re already seeing the effects: there’s an awful lot of reasons for the rise of the alt-right, but baked in there is a cultural amnesia, a collective forgetting that isn’t just about the passing of the generation that fought WWII, but an erosion of historical consciousness. Ask any student of mine and they’ll tell you (presumably with an eye roll) that I reliably harangue pretty much every class I teach at some point about the need to read history. The last few years I’ve taught Philip Roth’s novel The Plot Against America, an alternative history that imagines what would have happened if Charles Lindbergh, a Nazi sympathizer, had run against FDR in 1940 and won. I taught the novel once before, when I first started my job at Memorial, but it didn’t get much traction with students. Now, however, I assumed it would grip them with its eerie prescience: a story about a populist celebrity with autocratic and racist tendencies upsetting an establishment politician with the message “America First.”

But no. It did resonate with a few students, but overall the reaction was meh. A colleague of mine has also taught the novel a few times in recent years, and he reports much the same response.

In my very first year here at Memorial, I taught Martin Amis’ novel Time’s Arrow in a first year fiction course—a Holocaust novel that takes place with time reversed, the conceit being that only when witnessed backwards can the Holocaust be understandable. Backwards, it becomes a story of German munificence, in which they call down smoke and ash from the sky to create inert bodies, into which they breathe life and send them on trains out into the world. My argument in lecture was that Amis works to defamiliarize the narrative of the Holocaust as a means of combatting the way in which repeatedly hearing a story inures us to it, and reawake the reader to the pure unthinkability of the atrocity. I cited Art Spiegelman’s graphic novel Maus and Roberto Benigni’s film Life is Beautiful as texts that perform a similar function, but by that point the blank expressions on my students’ faces made it clear that defamiliarizing the Holocaust was a bridge too far when mere familiarity was lacking.

To be clear, I don’t blame my students. They have grown up in a culture that has de-emphasized history, both within the educational system and without, and terms like “Nazi” and “fascist” have more traction as online insults than as historical actualities. Millennials are understandably more preoccupied with the future, given that the realities of climate change mean they may not have one. But if the future is to be secured, it must needs be with global and internationalist solutions—we’re well past the point when nation-states can turn inward. The European Union was hardly a perfect construct, but it emerged from the recognition that the world would not survive another conflagration like WWII. Now that that memory has faded, the EU looks to be on a knife’s edge, and nativist autocracies have been making a comeback worldwide. We should of course honour the sacrifices made by those who fought and died 75 years ago, but more importantly we should remember the collective sacrifices of nations mobilized to large-scale action, and the ways in which alliances and cooperation made the defeat of Nazism possible.

The generational memory of WWII is fading. Let’s lose the platitudes about freedom and sacrifice and the why of it all, and honour the dead by not forgetting the how.

One response to “Thoughts on D-Day and Generational Memory”