So I don’t know how everyone else is feeling, but sitting here, counting down the hours to tonight’s GoT episode, feels not at all unlike sitting around a fire with Tyrion, Brienne, et al waiting for the end. Fortunately, I had a lot of excess thoughts in my head after the previous episode, which I offer up here as an amuse bouche before the meal proper tonight.

As we head into the final episodes of Game of Thrones, a question that has cropped up more than a few times among fans and critics is: what the hell is going on with Daenerys? What happened to the “breaker of chains,” the reformer of Slavers Bay who promised Tyrion that she meant to “break the wheel,” i.e. destroy the ancient system of house rivalries and hatred that has long defined Westeros—that is to say, the very game of thrones from which the series takes its name.

Since arriving on the shores of Westeros, that progressive mentality (progressive for a neo-medieval feudal world, at any rate) seems to have evaporated. She has questioned Varys’ loyalty, derided Tyrion for his mistakes, roasted the defiant Tarlys over Tyrion’s strong (and reasonable) objections, and otherwise made it clear that submission to her rule is non-negotiable. It is worth recalling that the one possible exception was when she appeared to entertain the idea that Yara Greyjoy, in exchange for her loyalty, might be permitted to reign as queen of the Iron Islands—a concession that startled her advisors, but which was made when she still was in Meereen. Since landing in Westeros, that latitude is as dead as the Tarlys. 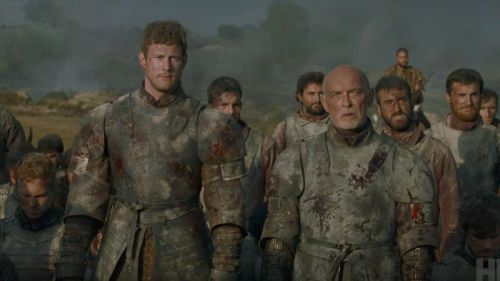 Her otherwise-promising confab with Sansa last week was but the most recent example of her rigidity, and the episode as a whole was framed with suggestions that she cannot, as Samwell astutely observed, see beyond her own crown. Jaime Lannister’s arrival occasioned a certain selective amnesia about her father and brother; in past episodes we’ve watched her reckon with the reality of her father’s madness and criminality, and her avowal that she would never be like him (a promise made more tenuous with her treatment of the aforementioned Tarlys); she tells Jaime about the story Viserys would tell her about the Kingslayer and what punishments they had conceived for him, putting aside for the moment the fact that she watched in tacit approval as her late husband murdered her brother in a manner far more gruesome than a sword in the back. And at the end of the episode, Jon’s revelation of his parentage evoked not the joyful realization that she was not in fact the last Targaryen, nor the icky realization that, yes, she’s been fucking her nephew, but “Oh, crap! He’s got the stronger claim to the throne!”

George R.R. Martin has said countless times that A Song of Ice and Fire “grew in the telling.” When he started writing A Game of Thrones, he conceived of it as a series of three novels; then it became five; and now seven, and anyone who has read to the end of A Dance With Dragons probably wonders, as I do, how he means to resolve this ever-more-sprawling narrative in just two books. He could really use a thanos ex machina to cull the ensemble by half.

My suspicion is that his ever-more-glacial writing process has been due to the inevitable narrative snarls, cul de sacs, and painted-in-corners that come with multiplying the number of plot threads and cast size to an untenable degree. A Game of Thrones felt epic and sprawling because it had eight POV characters; A Dance With Dragons doubled that, to the point where, as an acquaintance of mine astutely pointed out, reading it was like “pulling taffy.” 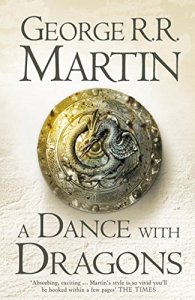 One side effect of both this narrative bloat and the ever-lengthening time the series takes until completion is that, for good or for ill, the world of ASOIAF has become increasingly complex and granular—by way of the primary texts themselves, such ancillary texts as The World of Ice and Fire, Fire and Blood (the history of the Targaryens), The Lands of Ice and Fire (a definitive series of maps of Westeros and Essos), to say nothing of the various wikis and websites devoted to every last detail of GRRM’s creation.

Game of Thrones the series has done an admirable job in paring down the bloat, though it has also been subject to audience complaint about the proliferation of names and storylines. Sometimes this has not worked as well as it might (the entire Dorne departure, for example), but with only four episodes to go we’re looking at an economy of storytelling that GRRM might want to take as an example going forward.

That being said, the series has also got a certain amount of the novels’ world-building baked into it, which brings us back to the question of Daenerys seemingly throwing off the mantle of liberator in favour of the conqueror’s crown.

To my mind, such a question was more or less inevitable, as it is rooted in fantasy as a genre. As I have written on this blog and elsewhere, fantasy has entered an interesting phase, insofar as a not-insignificant number of contemporary fantasists (Terry Pratchett, Neil Gaiman, N.K. Jemisin, Lev Grossman, J.K. Rowling, among others) have been using this genre—rooted as it is Christian, scriptural, and mythopoeic sensibilities á là Tolkien and C.S. Lewis—to articulate a specifically secular and humanist worldview. GRRM is no exception, and indeed I would argue he has been more influential in this respect than most: for all of its Tolkienesque trappings, ASOIAF has far more in common with Shakespeare’s history plays and their preoccupation with the secular negotiation of power than with The Lord of the Rings’ feudal and indeed Catholic figuration of power as extrinsic and immutable.

Fate and destiny have always been key tropes—and more importantly, key plot devices—in fantasy, which again speaks to the genre’s roots in medieval romance and Christian scripture. The “chosen one” is a figure of divine right, whose coming and ascension sets things aright again: Jesus Christ, King Arthur, the Pevensie children in the Narnia Chronicles, Stephen R. Donaldson’s Thomas Covenant, Belgarion in The Belgariad by David Eddings, the Shannara descendants in Terry Brooks’ Shannara Chronicles, Aragorn in The Lord of the Rings … right up to Neo in The Matrix and Buffy the Vampire Slayer.

Ultimately, however, Buffy complicates this ostensible fate, as does J.K. Rowling in the Harry Potter novels; but then, neither of them were dealing with the other manner of divine right, which is the logic of hereditary monarchy. This is where we arrive at what we might call “the Daenerys paradox.” Put simply, how does one act as a liberator when one’s claim to that role necessitates the fealty of the liberated? Back in Essos, Daenerys always held up a choice: she freed the Unsullied and the slaves of Astapor, Yunkai, and Meereen, but promised free passage to anyone unwilling to swear loyalty. She won over the Dothraki though a show of strength, but again, their loyalty was freely given.

But that’s not how it’s going to work in Westeros, for the simple reason that it can’t. All things being equal, it could be worse for Daenerys—she does genuinely get to face off against an unreconstructed tyrant in the form of Cersei Lannister, and an otherwise still-fractured Seven Kingdoms; it’s not as if the civil war resolved itself into an equitable peace with a well-loved successor to Robert Baratheon.

Daenerys’ lifelong quest has been predicated on her claim to the throne, and were she the heroine of a more pedestrian work of post-Tolkien fantasy, she would unequivocally be the “chosen one” in the same mode as King Arthur or Aragorn. But ASOIAF complicates this on any number of levels, not the least of which being the way in which the series has complicated the very notion of divine right: the Iron Throne, after all, is a mere three centuries old, and the convention of a single king or queen ruling over the Seven Kingdoms was forged by conquest. In the thousands of years of Westrosi history, three hundred years is a mere blip, and the Targaryens mere tourists. GRRM has built a great deal of contingency into ASOIAF’s long game, and Daenerys’ inflexibility on “bending the knee” is likely going to have to change before all is said and done.

Since watching the new opening credits, however, I’ve become increasingly convinced that Westeros will be a radically different place at the end than where we began—and not just because there will have been a possibly-apocalyptic war fought with the dead. I keep coming back to Daenerys’ vision of the throne room in King’s Landing, with the roof open to the sky and snow drifting on the Iron Throne. As I said in our first post for the season two weeks ago, the reversed trajectory of the opening credits—starting north of the Wall and ending in King’s Landing—suggests a fundamental change in the political power in Westeros. For seven seasons, we always started with the seat of power. I’m curious whether the credits will change again after tonight’s episode, if in fact the looming battle settles the Night King’s hash. If King’s Landing becomes a vestige of the old order, perhaps that will mean Daenerys comes back to herself and does, in fact, break the wheel. 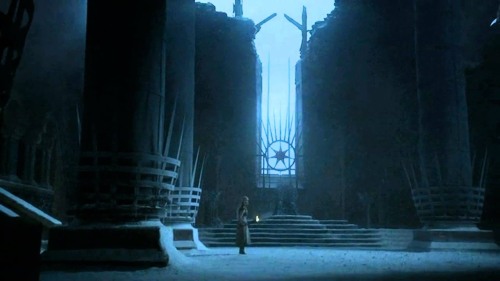