Of zombies and rabbits

Warning: spoilers ahead for Watership Down and The Walking Dead.

I have done a lot of thinking and writing about zombie apocalypse and what I’ve been calling (in my as-yet unfinished scholarly articles on the topic) the “spectre of catastrophe.” So imagine my surprise when, after watching a recently-dropped limited-series show on Netflix last night, I had a weird revelation.

Much zombie apocalypse, but most especially The Walking Dead, is essentially based on Watership Down. Or, rather, not based on Richard Adams’ 1972 novel about rabbits—but the uncannily similar tropes and themes are somewhat illuminating.

This past weekend, my girlfriend and I watched all four episodes of the Netflix-BBC co-production, and quite loved it. The one major downside to this version is that the animation is quite terrible, and makes it very difficult at points to differentiate between the characters. On the upside, voice-cast is truly staggering: James McAvoy as the reluctant leader Hazel, Nicholas Hoult as the runty Fiver, whose oracular visions prompt them to flee their warren at the outset, Gemma Atterton as Clover, Olivia Colman as Strawberry, and a host of others like Daniel Kaluuya, Gemma Chan, Tom Wilkinson, Rosamund Pike, Mackenzie Crook, Adewale Akinnuoye-Agbaje (aka Simon Adebisi from Oz), and Ben Kingsley as the menacing General Woundwort. But for me the standouts were John Boyega as Bigwig, a bruiser  who has to learn subtlety, and, in one of my favourite bits of voice-casting ever, Peter Capaldi as the caustic and sarcastic seagull Keehar.

I read Watership Down when I was in high school and loved it; but I am also of the generation of children who were absolutely traumatized by the 1979 film, which doubled down on the violence and death in the novel to create an animated spectacle that I think was burned indelibly on my young cerebral cortex (even doing a Google image search made me tremble somewhat). My experience in this regard is not uncommon, given the number of parents who thought, “Oh, a cute film about bunnies,” little knowing the horror they were about to visit on their children.

The 2018 iteration retains the novel’s sensibilities with regards to the precarious existence of prey animals, but dials back the violent visuals. It still builds tension extremely well: we are never not aware of how vulnerable the rabbits are all the time, and indeed the prologue to the first episode relates the rabbits’ creation mythology in which the sun god Frith punishes them—the earth’s original animals—for their proliferation by introducing a host of predators to cull their numbers.

So basically, they live in a word where everything wants to eat them—dogs, foxes, cats, owls, hawks, and, of course, people … and when people don’t want to eat them, they want to domesticate them and put them in cages as pets. More pernicious, however, is humanity’s rapacious need for land, which is what drives Hazel and Fiver and their small band of believers from their warren to start with. Fiver has visions of death and destruction that baffle him, but which we recognize as backhoes callously digging up the land for the construction of a new subdivision with no regard for the society of animals living below. Hazel and his tiny band of followers get out, and later on hear of the destruction from the warren’s sole survivor.

But … what does this have to do with zombie apocalypse, you ask? Good question, though I will draw your attention to my above observation that everything out in the world wants to eat these rabbits. Leaving the safety of their warren and its environs, Hazel et al are exposed and endangered, and every step they take into the unknown world is one that could end suddenly with claws and teeth.

What’s important to keep in mind about Watership Down—and what I’d either forgotten in the intervening years, or (more likely) never grasped to begin with—is that it is essentially a dystopian story. It’s about the violent and capricious destruction of a society and the harrowing journey to find a new safe haven. And for all of the monsters populating that landscape, the greatest danger posed to our main characters is other rabbits—just as, in your average zombie film, the true threat isn’t from the dead but from the living.

Over its eight and a half seasons, The Walking Dead has driven this particular theme home … again and again and again. And again. My biggest beef with the storytelling in TWD is that it hasn’t done much to break from the narrative formula of zombie films: which is to say, the panic and flight following the initial outbreak, fighting one’s way through the undead hordes to sanctuary, respite within that sanctuary for a time (whether it be a mall, a military compound, a pub, or Bill Murray’s house, as in Dawn of the Dead, 28 Days Later, Shaun of the Dead, and Zombieland, respectively), until something happens that forces you to leave and once again brave the world without. TWD reiterated this narrative season after season, always with a new safe haven (Herschel’s farm, the prison, Woodbury, Terminus, Alexandria) and a newer, badder big bad to contend with (the dead themselves, their own weaknesses and infighting, the Governor, the Wolves, cannibals, and of course Negan).*

All of which leapt to mind as I watched Watership Down. Hazel and his small band encounter two other rabbit warrens, each of which offers a chillingly dystopic vision. In the first, all of the rabbits are well-fed and welcoming, and our heroes gorge themselves on a massive pile of lettuce and leafy greens and carrots deposited nearby. It seems too good to be true, and of course it is—though only the clairvoyant Fiver sees as much, and refuses to join his fellows at the feast. Bigwig threatens Fiver, warning him not to spoil this for the others, but when he marches off in anger he finds himself caught in a wire snare—because that’s the deal at this warren, they get to live comfortable and well-fed lives, in exchange for one of their number being taken on a regular basis for the local farmer’s pot. And this has become the ethos of the warren: they reject the usual stories told by the rabbit bards that celebrate speed and cunning, instead offering sermons on the virtues of gratitude and complacency, and not questioning generosity that keeps them well-fed.

Dystopian visions of complacency range from the Lotus-Eaters of The Odyssey to Aldous Huxley’s self-medicating society in Brave New World. The devil’s bargain Richard Adams introduces in Watership Down allegorizes more explicitly the dangers of trading freedom for comfort. While there is no obvious correlative in zombie apocalypse narratives, I did think of the Terminus episodes of TWD. Desperate to find safe haven and suffering from hunger and thirst, Rick Grimes et al follow signs leading to a settlement calling itself “Terminus,” which promise safety and comfort and welcome. The promise proves to be merely a lure by which the people of Terminus draw in the unwary and proceed to kill and eat them, trading their humanity for safety and plenty (the first thing some of Grimes’ people encounter is a wholesome-looking women presiding over a grill heaped with meat). 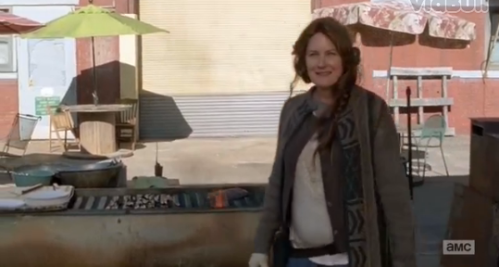 Aside from Bigwig’s close encounter with the snare, the rabbits make their escape without much difficulty, and are joined by Strawberry (Olivia Colman), who tells them that no one in the warren makes friends because they know they might lose them to the snare. At the same time they are eager to welcome newcomers to the warren, as greater numbers lessen the chances of being taken next.

More terrifying, and more actively threatening, is the second warren—an authoritarian regime called “Efafra,” overseen by General Woundwort, in which most of the rabbits—largely females—are essentially held captive in terrified thrall to a quasi-military hierarchy sustained by Woundwort’s chosen “captains,” thuggish rabbits who take pleasure in tormenting the others. Their cruelty is its own reward, as they revel in their authority and privileges. The parallels between Woundwort and Negan, and Efafra and the Sanctuary are fairly obvious, but that likely has mostly to do with the ways in which both stories show how despotic societies are sustained by a cult of personality surrounding the leader, his willing subordinates chosen for their own talent for cruelty, and a cowed populace. Of all the threats faced by Hazel et al, greater than an entire ecosystem seemingly mobilized to snack on them is the threat of other rabbits in thrall to violence. Holly, the lone survivor of the original warren, tells one of Woundwort’s captains that he lacks “animality”—that what Efafra has done is emulate humans, and in doing so, has given up what we might call a basic rabbit-sense.

Not, perhaps, the subtlest of messages, but one that resonates strongly in a world where humans are depicted as thoughtlessly destructive, and the Efafran rabbits are genocidal, determined to exterminate any neighbouring warrens that might compete for resources. As stated above, I was struck by the critical mass of voice talent recruited for this remake, which poses the question of why remake Watership Down in the present moment (aside from Netflix’s voracious need for more and more content, of course)? There are, I have to imagine, many answers, not the least of which is the pressing need to reassess our relationship to the natural world, coupled with the apocalyptic preoccupations of so much popular culture. Richard Adams wrote Watership Down at the dawn of the environmental movement in a moment that saw the first celebration of Earth Day and the establishment of the Environmental Protection Agency. All of the themes baked into the narrative have, sadly, only become more acute and immediate in the intervening half-century. I suppose I shouldn’t be surprised when a recent retelling of Adams’ story resonates with the various other catastrophic narratives I’ve been writing about.

*To the show’s credit, it has broken this cycle since settling in Alexandria and making contact with the various other settlements in the area. Since the defeat of Negan and the Saviours this past season, TWD has opened the possibility of a more nuanced and open-ended narrative evolution.

Filed under maunderings, television, The Triumph of Death, what I'm watching

One response to “Of zombies and rabbits”