You should watch The Expanse, but you should also read the novels 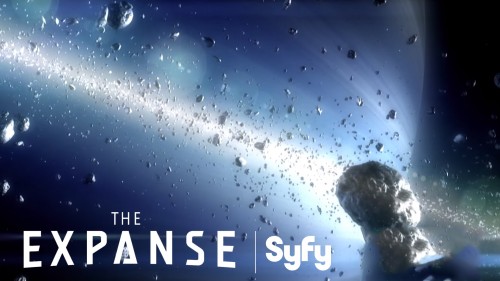 Tonight, the new ScyFy Channel series The Expanse premieres, which seems as good an excuse as any for me to nerd out about about the novels from which it is adapted.

I picked up Leviathan Wakes earlier this year, as much out of curiosity as anything. It’s a thick, brick-like book, and at that point it had three others in the series on the shelf beside it. Its cover featured generic huge-spacecraft art, but what had been catching my eye was the blurb above the title from none other than George R.R. Martin declaring “It’s been too long since we’ve had a really kickass space opera.” Its author, James S.A. Corey, is actually the pseudonym for two people: Daniel Abraham and Ty Franck, the latter of whom was GRRM’s personal assistant for a long time (or might still be, but I suspect he’s busy with his own stuff now). Colour me intrigued: I gave Leviathan Wakes a chance.

And then proceeded to devour the next three books—Caliban’s War, Abaddon’s Gate, Cibola Burn—all of which are 500+ pages, in the space of about a week.

It is a really, really good series, and if you like SF at all you owe it to yourself to read them. It’s space opera in the hands of a pair of pros. Structurally, one senses GRRM’s influence: they proceed through point-of-view chapters like A Song of Ice and Fire, but unlike Martin’s books, they exercise restraint. At no point are we overwhelmed by a surfeit of perspectives, and each novel has a contained narrative arc. They are very tightly plotted, and feature well-realized characters.

The basic premise is a compelling one: set several centuries in the future, humanity has colonized the solar system, but has not progressed into interstellar space. In interviews, the authors cite the fact that the great deal of outer-space SF tends to focus on our first steps in becoming spacefarers, or skips ahead to a point where we’ve mastered the technology that allows us to travel between the stars. What these novels do is posit a future moment when we’ve become quite facile at hopping between Earth, Mars, and the outer planets (the “Belt”), but lack anything resembling the capacity to traverse the unthinkably vast distances beyond. Hence, we encounter a future with a notably industrial, jury-rigged feel to it, as the economies of this future depend upon vast fleets that essentially approximate the tramp steamers plying the oceans of the present. Many of the ships, to say nothing of the ports and shipyards, are old and rusted, oft-repaired; much more Millennium Falcon that U.S.S. Enterprise.

I won’t get into plot points, as my main goal here is to just plug the books. As the series proceeds, however, I imagine there will be a number of posts in the future getting into the narrative particulars.

I do however want to say that one of the things I really love about this series of novels is that they’re a big thumb in the eye of the Sad Puppies. Last April I wrote about the furor surrounding this year’s Hugo Awards, in which a group calling themselves the Sad Puppies successfully lobbied a portion of Worldcon’s membership to nominate their slate of choices, in order to strike back, in the words of one of their more vociferous agitators, “against the left-wing control freaks who have subjected science fiction to ideological control for two decades and are now attempting to do the same thing in the game industry.” To recap, the previous round of Hugo nominees featured a significant number of works by women and authors of colour, or which featured stories with socially progressive elements. And, well, we couldn’t have that!

My blog post on the subject focused mostly on the arguments of author Brad Torgersen, who along with Larry Correia spearheaded the Puppy revolt. Torgersen’s main beef is that science fiction and fantasy (SF/F) has forsaken its origins in order to effect “subversive switcheroos” that appropriate traditional SF/F tropes and pervert them to articulate leftist, social justice agendas rather than good old-fashioned straightforward adventures.

Space opera? Our plucky underdogs will be transgender socialists trying to fight the evil galactic corporations. War? The troops are fighting for evil, not good, and only realize it at the end. Planetary colonization? The humans are the invaders and the native aliens are the righteous victims. Yadda yadda yadda.

Which is not to say you can’t make a good SF/F book about racism, or sexism, or gender issues, or sex, or whatever other close-to-home topic you want. But for Pete’s sake, why did we think it was a good idea to put these things so much on permanent display, that the stuff which originally made the field attractive in the first place — To Boldly Go Where No One Has Gone Before! — is pushed to the side? Or even absent altogether?

You can read the entirety of my critique in my post, but my response basically boiled down to this:

The reductiveness of this kind of thinking is truly sad, as it implies yet another canard—that one can’t do sweeping, epic, Tolkienesque fantasy, or bombastic space opera, and introduce the elements Torgersen derides. Except that you can, and writers do, all the time. It might not precisely be Tolkien or Heinlein, but the last time I was at the bookstore (yesterday), Tolkien and Heinlein were still quite well represented on the shelves.

Which brings us back to The Expanse, which is as perfect a demonstration of this principle as I’ve encountered. The novels depict a racially diverse future, one in which race and ethnicity are hardly remarked upon, often leaving us to divine characters’ origins through their names (Naomi Nagata, Alex Kamal, Julie Mao, e.g.), and features a lot of sharply drawn, compelling female characters without it ever feeling as though this representation is there for the sake of representation. One of the best characters is a U.N. undersecretary named Chrisjen Avasarala, an Indian woman with a marvelously foul mouth, who generally functions as the power behind the throne on Earth (she’ll be played in the TV adaptation by the magnificent Shohreh Aghdashloo). The series deals with such contemporary concerns as corporate power and malfeasance, terrorism, colonialist arrogance and colonial resistance, militarism and the ethics of warfare, and more. And it does so with all the spirit and bombast of the space operas of yore that Brad Torgersen and company lament as passing from this earth.

What’s more, the series delights in the trappings of genre: Leviathan Wakes is a noirish, hard-boiled conspiracy narrative. Caliban’s War, the second in the series, is good old-fashioned military SF, replete with space marines in mechanized combat armour. Abaddon’s Gate is a classic revenge drama. Cibola Burn is a about a standoff between planetary settlers and the corporate interests who have assumed ownership of their new home. And Nemesis Games is the high drama of desperate diplomacy in the midst of war. All of which unfolds from a variety of points of view, but especially from a core group of characters whose depth and complexity is what makes us care about the larger dramas engulfing the solar system.

So I’ll be turning on The Expanse tonight with about the same level of anticipation as a new season of Game of Thrones. My fingers are crossed that it will be good, but early reviews are all positive. Even if I hadn’t read the novels, one critic’s promise that “it will fill the void left by Firefly and Battlestar Galactica” would certainly have me watching.

One response to “You should watch The Expanse, but you should also read the novels”