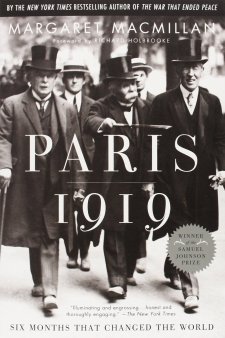 CORRECTION: It was pointed out to me that the Treaty of Versailles dealt specifically with Germany. The partitioning of the former Ottoman Empire, which I discuss below, was performed by the Treaty of Sèvres. Apologies for the inaccuracy.

Out of a handful of books that I habitually recommend as “required reading for the modern age,” I probably most frequently proselytize for Margaret MacMillan’s magisterial history Paris 1919: Six Months that Changed the World. It chronicles the negotiation and signing of the Treaty of Versailles, that notorious document that now reads like a roadmap of the twentieth century. I’ve been thinking a great deal about that book in the last few days, as I watch the flow of confusion, argument, and fear in my various newsfeeds.

MacMillan, then a professor of history at Ryerson University in Toronto (she is now at Oxford), wrote Paris 1919 in the late 1990s, and at first had difficulty finding a publisher. After September 11th, 2001, however, she was beating them off with a stick: people looked at the smoking ruins of the World Trade Center, and watched the ramp-up to the invasion of Iraq and asked a series of questions: how did this happen? why did this happen? who are these people, and why do they hate us? In the triumphal decade that spanned from the fall of the Berlin Wall to the fall of the two towers, when America had apparently emerged as the world’s sole superpower and Francis Fukuyama could smugly announce the “end of history,” no one wanted to read a lengthy, detailed history about a treaty that effectively set the stage for the twentieth century’s bloodiest conflicts. But the West’s rude awakening on that crystalline Tuesday morning made MacMillan’s book and others like it hot property.

Why? The Treaty of Versailles is most notorious for imposing humiliating and punishing reparations on Germany, a punitive measure that served to fuel the rise of Hitler and National Socialism. But among the other provisions for the victorious allies was the carving up of the collapsed Ottoman Empire. The western powers divvied up the oil-rich territory into mandates, arbitrarily setting down new borders without consideration given to tribal affiliation, sectarian division, local geography, or for that matter history. Versailles basically drew the lines of what today is Syria, Iraq, Jordan, and Lebanon, and of course Palestine.

I bring this up because it is so frustrating to see so many assertions, about Syria, ISIS, Iraq, and the monumental clusterfuck that region has become, made with no regard to history, and the role the West has played in bringing us to this Gordian Knot of tangled alliances, loyalties, motivations, and intentions. If the twentieth century has any lesson for us, it’s that every time the West intervenes in the Middle East, we make things worse. Always. The Treaty of Versailles imposed arbitrarily drawn nation-states on a volatile region with all the subtlety of a sledgehammer. Britain and France governed their mandates in the region through bribery, violence, and the stoking of sectarian and tribal rivalries. The oil-producing regions did not benefit from their resources, as Western stakeholders took the lion’s share of the profits. When the secular, democratically elected prime minister Mohammad Mossaddegh of Iran moved to nationalize the Iranian oil industry, Great Britain and the U.S. orchestrated a coup in 1953 and installed the dictatorial Shah, who would rule with an iron fist for almost thirty years. When he was finally ousted by the fundamentalist regime of the Ayatollah Khomeini , the U.S. encouraged their ally Saddam Hussein with money and arms to prosecute a war in which millions died on both sides, during which Hussein used American-supplied chemical weapons against his own people. When Hussein went a bridge too far into Kuwait and was routed by the U.S. and its allies, the U.S. encouraged rebel factions within Iraq to rise up, but did nothing to support them. Saddam crushed them.

I won’t rehearse the idiocy of Operation Iraqi Freedom, other than to point out that the incompetence of the occupation gave rise to a large number of disenfranchised men with combat training who now form the core of ISIS. And all the while, even as bloviators vilify Islam and paint all Muslims as potential threat, the West remains faithfully allied to Saudi Arabia, the site and source of the most virulent strain of fundamentalism, Wahhabism, looking the other way while they pour huge amounts of money into ISIS. If for a significant number of people in the Middle East the U.S. is the Great Satan, the House of Saud is the Only Slightly Lesser Satan.

And they are our ally and partner in arms deals.

All of this is by way of saying that when you see people on Facebook or elsewhere asking why their tax dollars should go to support refugees from Syria, you might want to not-so-gently remind them that we in the West have profited hugely from that region in the ninety-six years since the Treaty of Versailles was formalized. And that every time we’ve poured our blood and treasure into military interventions, we’ve only made things worse for the people living there.

Nor is this all a form of geopolitical victim-blaming. France suffered a horrific attack from dehumanized monsters, and it is always a blow to the soul to see such terrible things unfold—and it is always more distressing when it takes place somewhere we consider safe. But we should also remember that there was a similar attack in Beruit the day before, and one in Ankara a month ago, and remind ourselves when someone starts honking off about the “clash of civilizations” that Islamist extremism has disproportionately harmed Muslims.

And it is those people who are fleeing. As a much-retweeted Twitter post pithily said, “To people blaming refugees for attacks in Paris tonight. Do you not realise these are the people the refugees are trying to run away from..?”

I don’t know what a solution in the Middle East looks like, but it cannot have fear and hatred as its starting point. The West deserves to have some skin in this game, by which I don’t mean we’re owed, but that we owe the world at large to help these people whose house is on fire. And when your neighbour’s house is on fire, as FDR famously said, you don’t haggle over the price of your garden hose. The Paris attacks were specifically designed to make us fear, and to translate that fear into suspicion, paranoia, and ideally hatred of Muslims. That’s what they want. Why on earth would we want to hand them such an easy victory?

Always remember that the road to peace begins with compassion.