At this point in my life, I can safely say that I’ve got conspiracy theory fatigue. Part of that is self-inflicted, as I spent five years writing my doctoral dissertation on conspiracy theory and paranoia in postwar American fiction and film; and having staked out that scholarly turf, I’ve kept myself apprised of the currents of paranoid wingnuttery in the eleven years since, from Trutherism to Birtherism and beyond. After a time it all becomes extremely repetitive: the pronouncements of those whom Richard Hofstadter dubbed “paranoid spokesmen” are about as formulaic and predictable as pornography.

I offer this preamble by way of saying that I very, very rarely feel compelled to write about this sort of thing any more.

What twigged my interest over the last few days is a report that a group of Texan Tea Partiers have raised concerns over a series of joint military exercises that will take place partially in the state, code-named Jade Helm 15. Now, concern over a large military exercise taking place in your backyard is understandable, but of course the conspiracists are proclaiming loudly that this is a “false flag” operation designed to provide cover for the invasion of Texas and establishment of martial law. Those making this claim point to the fact that several Wal-Marts have closed unexpectedly, and have suggested that the empty stores will be used as detention camps for anyone resisting the ensuing occupation.

There’s more, involving dark claims that tunnels have been built between the Wal-Marts and other points to better facilitate the invasion, but I think you get the idea. Yet another installment in the wingnut chronicles, right? Except that this time the conspiracy theory has received political endorsement: Governor Greg Abbott has responded to the wingnuts by mobilizing the Texas National Guard and ordering them to “monitor” the operations to make certain they don’t overstep their bounds. “It is important that Texans,” he said, “know their safety, constitutional rights, private property rights and civil liberties will not be infringed upon.” And if that wasn’t enough, Senator Ted Cruz has promised his constituents that he will get answers from the Pentagon because “when the federal government has not demonstrated itself to be trustworthy in this administration, the natural consequence is that many citizens don’t trust what it is saying.” Though if Jade Helm 15 is in fact a false flag operation designed to turn Texas into Obama’s tinpot dictatorship, I’m not certain why Cruz seems to think the Pentagon would tell him that.

Even here, with elected officials getting in on the paranoia, I can hardly colour myself surprised. Considering the accusations and charges thrown at Obama from the highest levels of the GOP, the invasion of Texas seems like small beer.

No, what’s gotten under my skin in reading this most recent conspiracist argle-bargle is the realization that this kind of paranoia proceeds from a position of privilege. “Paranoia,” let’s not forget, is a psychological designation and entails, among other things, a high degree of delusion and fantasy. Paranoia is by definition contingent upon context. To put it another way: a 1950s housewife living in Topeka who becomes convinced that the government has her under intense surveillance and will soon send the secret police to arrest her is almost certainly paranoid; by contrast, a mid-ranking member of Stalin’s Politburo in the 1930s who believes this is just exercising common sense.

In his excellent book Empire of Conspiracy, Timothy Melley marks out conspiracy-theory based paranoia from more pedestrian manifestations by identifying it with what he calls “agency panic.” The term is a deft little double entendre referring to the fear on one hand of “agencies” like the ATF, CIA, FBI, and so forth (or more classically, the Illuminati or the Freemasons); and on the other hand, the fear of losing one’s individual agency at the hands of a conspiratorial group or organization.

But let’s return to the Texas conspiracy and run down a checklist of fears it expresses that are common to most such conspiracy theories:

As I said above, I don’t willingly return to my dissertation topic without significant motivation. But what inspired me to sit down with this topic was my sudden anger at just how obscene this kind of conspiracy theory is after a year that has seen the events of Ferguson and the current unrest in Baltimore, the deaths of Michael Brown, Eric Garner, Tamir Rice, Freddie Gray, and the increasingly unavoidable fact that police forces across the U.S. are implacably and systemically set against urban black populations. I don’t mean this in the sense of “how dare you float a conspiracy theory when there’s racism you should be paying attention to,” but rather that all of those elements that comprise conspiracists’ paranoid fantasies are quotidian realities for African-Americans. Agency panic? Black agency has been systematically denuded by agencies from HUD to local police forces. Military occupation and martial law? From a strict legal perspective, no; but from any practical estimation, urban blacks are constantly subjected to a militarized police force, something that was on terrifying display in Ferguson last summer (as I wrote about in a blog post then). Randy Balko’s book Rise of the Warrior Cop is as damning an indictment of this fact as any I have encountered. Constitutional abuses? The War on Drugs, which has disproportionally hurt African-Americans, has all but dispensed with the Fourth Amendment. Mass incarceration? I don’t feel this one needs any explanation, as the U.S. has the highest incarceration rate in the world, again disproportionately affecting black Americans. 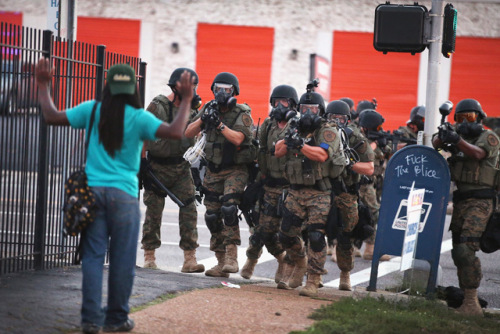 The paranoid fantasies emerging from the right wing of the American political spectrum have always had a disturbingly racist character, and while organizations like the John Birch Society are Exhibit A, the Birchers are by no means sui generis. If I have to point to the highest-profile paranoia on the American right, the NRA unavoidably takes the top spot, with Wayne LaPierre playing the mouth-frothing role of their paranoid spokesman. Everything in his many, many screeds is framed in terms of governmental intrusion and overreach—the slightest hint of a suggestion of a longer waiting period or a restriction on magazine capacity gets characterized as a plot to disarm Americans in order to pave the way for a totalitarian socialist government. Whether LaPierre actually believes his conspiracist bloviation or is just cynically playing on the credulity of his organization’s membership, it nevertheless feeds an insatiable appetite. When I earlier compared conspiracism to pornography, this was what I was thinking of.

But as any even casual observer of NRA rhetoric knows, second amendment fundamentalism is a whites-only club. When Cliven Bundy defied federal agents who wanted him to stop illegally grazing his cattle on government land, and was supported by heavily-armed “patriots,” he was the darling of Fox News in general and Sean Hannity in particular. When Bundy let his mouth run and revealed he was an unreconstructed racist, watching Hannity backpedal was amusing; but really, if he was being honest, he shouldn’t have. Everything about Bundy’s standoff, from Fox’s initial valorization of his bold defiance of government agents, to the fact that said agents responded peacefully when faced with armed citizens, screams white privilege. A counterfactual floated by any number of people at the time wondered how the situation would have been different if Bundy and his supporters had been black.

It would take a particularly torturous and disingenuous argument to suggest it would be no different. Fox News and Bundy’s other boosters in the right-wing media would have condemned it as armed revolt; the fact that Bundy was breaking the law in grazing his cattle on government land would have been repeated ad nauseam; and the “patriots” in the scenario would have been the agents of law enforcement. And had Bundy et al been black, it is highly doubtful the government agents would have backed down.

All of this is by way of saying that right-wing paranoia about government is just that—paranoia. The Cliven Bundy fiasco was not in itself a manifestation of conspiracism, it just shared its DNA—the Fox News crowd was quick to jump on board because it perfectly encapsulated the kernel of the conspiracist narrative, i.e. a dictatorial government seeking to run roughshod over a good old boy’s rights (rights which, in this case, he didn’t actually have—but whatever). The touchstone moments of right-wing conspiracism, most notably the catastrophe at the Branch Davidian compound in Waco, Texas, are not cumulative indicators of systematic government aggression but examples of massive cock-ups. Meanwhile, the actual grist for the paranoiac mill, such as the NSA’s massive, and massively unprecedented, surveillance of digital communication does not seem to figure into the right-wing paranoid mentality. No one in those corners seems inclined to claim Edward Snowden or Chelsea Manning as martyrs to the cause.

Meanwhile, what this past year has continually showed us is that precisely the kind of governmental behavior that animates conspiracist fantasy has been deployed for decades against actual people. A right-wing website, apropos of Jade Helm 15, poses the hypothetical “What would happen if martial law was declared in America?” If actual martial law were declared, that would be shocking, and would go a certain distance to vindicating the paranoia of a vocal minority. But what is not shocking, or at least doesn’t make the news unless there’s a police killing and/or riot, is that a certain segment of America lives under de facto martial law, their rights of privacy and personal autonomy constantly contravened; and in every confrontation with law enforcement, whether it’s for a broken taillight or loitering, black Americans know they are under threat of deadly violence. That’s not paranoia: that’s everyday reality.

To be genuinely paranoid, you have to have the freedom to concoct imaginary enemies.