There’s a moment in The Hobbit, before Bilbo and company arrive at Rivendell, when Bilbo sees the first of the Misty Mountains, the range that more or less runs the length of Middle-Earth. Gazing up at it in awe, he asks whether the mountain he sees is in fact Erebor, the Lonely Mountain, the troupe’s ultimate destination. Balin the dwarf scoffs at him, setting him straight—informing him that they will have to go over those mountains and then through huge swathes of wilderness on the other side before they will arrive at Erebor.

It’s one of those fish-out-of-water moments, of which Bilbo has many over the course of the novel. It also emphasizes his parochialism and his complacent ignorance of the wider world. In itself, it is not much worth dwelling on, except that it is replicated by Samwise Gamgee in The Lord of the Rings. As the Fellowship journeys south they come in sight of a spur of the Misty Mountains, prompting confusion on Pippin’s part, who assumed that the mountains should be to their left and not directly ahead. Exasperated, Gandalf says, “There are many maps in Elrond’s house, but I suppose you never thought to look at them.” And once again they are set aright by a dwarf, as Gimli comes forward, declaring, “I need no map” and naming all of the mountains in view. A little bit later Sam, unknowingly echoing Bilbo, says “I’m beginning to think it’s time we got a sight of that Fiery Mountain, and saw the end of the Road, so to speak. I thought at first that this here Redhorn, or whatever its name is, might be it, till Gimli spoke his piece.” Tolkien wryly observes that “Maps conveyed nothing to Sam’s mind, and all distances in these strange lands seemed so vast that he was quite out of his reckoning.”

We can hardly blame Sam or Bilbo, for either their geographical ignorance or their wistful hope that the respective objectives of their journeys are much closer than they actually are. There might have been maps at Rivendell, but how useful would they have been to people who lack an understanding of the scope and scale of the wider world? In The Hobbit, Bilbo is excited by the appearance at his unexpected party of Thror’s map because he loves maps—and then we are informed that he had a large map framed in his hallway of the local land around him, with all his favourite hiking trails drawn in red ink. The juxtaposition of what is literally a treasure map depicting a mountain hundreds of miles away with one highlighting local hiking trails is almost touching, so great is the difference between the two—like a map of local parks placed alongside the map of a military campaign (which, when you consider how The Hobbit ends, is not an inapt comparison). By the same token, after Bilbo’s departure at the beginning of The Lord of the Rings, “Frodo began to feel restless, and all the old paths seemed too well-trodden. He looked at maps, and wondered what lay beyond their edges: maps made in the Shire showed mostly white spaces beyond its borders.” It is hard (for me, at least) not to read this passage without thinking of Heart of Darkness and Marlow’s fascination with “the white spaces on the map.” (Indeed, when talking about maps in my Tolkien class, I allude to Conrad’s novel enough that I’m starting to wonder if there’s an article there to be written).

Maps play a significantly different semantic role in fantasy fiction, however, insofar as they reverse the standard relationship between maps and the territory they depict. One way or another, maps are inherently fictional, in that they necessarily distort the material they seek to represent, even as they strive for scientific or mathematical accuracy. The actuality of the world, with all its intricacies, is translated into a set of lines on a flat surface, alongside a set of such overt fictions as national borders, other political designations, and place names. (To be clear: in calling borders and place names “fictional,” I am not saying they are not real, just that they are invented—they are fictions agreed upon by a consensus, and as such, are always subject to change). Mountains become gradations of colour or concentric lines on a relief map, cities and towns are rendered as dots, different nations are designated by a palette of striking colours and circumscribed by dotted lines. In this respect, maps are not dissimilar from fiction proper, which similarly seeks to render a given interpretation of reality but must needs deform it for specific purposes.

It is at this point in discussing maps that I like to pause and show a clip from The West Wing.

Maps in fantasy fiction, by contrast, are not depictions of extant territory. How could they be? They are rather outright inventions, but therefore have a drastically different relationship to their worlds than our maps. They are, in a word, deterministic. That is to say, the map determines the territory.

Consider the history of maps of our world. The earliest known attempt to present a map of the world is one from Babylon, around 600 BCE. It essentially depicts the world as a disc, with a handful of lands and cities and landmarks surrounding Babylon, all of which is surrounded by a circle of ocean.

Consider, in turn, a series of maps down through the ages: 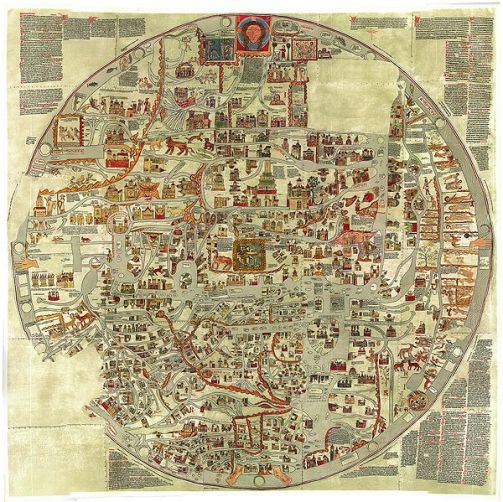 The Ebstorf Map (ca. 13th century), a medieval map of the world.

A map purporting to show Vinland (Newfoundland and the Maritimes–upper left corner), based on Viking exploration in the tenth century. 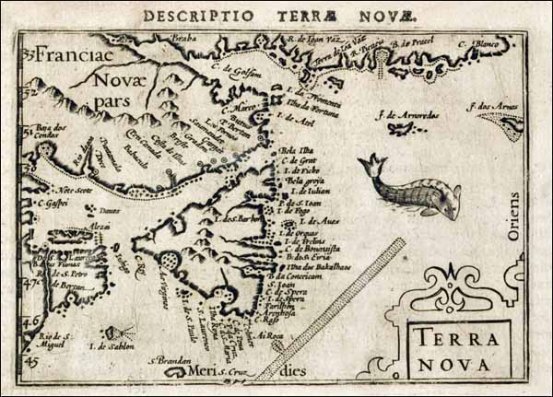 Can you see my house?

I suppose it could be argued that the movement of maps toward increasing accuracy contradicts my premise that maps are inherently fictional, but I would disagree; accuracy and reality are not the same thing. And as the (fictional) Organization of Cartographers for Social Equality would point out, the conflation of accuracy with reality can and has been deployed in the service of the powerful.

But I digress. Maps in fantasy fiction are paratextual, which is to say that—like prefaces, indices, appendices, annotations, title pages, afterword, and so forth—they work to circumscribe and define the text of the story. And by the same token, we are privy to them in a way the characters of the narrative are not. So when Sam grumbles about Caradhras not being Mount Doom, as he’d hoped, it is a moment not unlike dramatic irony—assuming, of course, the reader is anything like myself and obsessively consults the maps provided in order to know where in the world the characters are at any given point.

(This is not, I have been given to understand, a pervasive tendency—indeed, last year when I taught The Hobbit in my first-year English class, I polled the students to find out how many of them consulted the maps while reading. To my considerable shock, two-thirds of them did not look at the maps at all. And suddenly the more general geographical ignorance of our undergraduate population became a little bit more comprehensible).

The (quasi) dramatic irony of Sam and Bilbo’s misapprehension lies in the fact that readers know, far more indelibly than the characters, the geography of the world they inhabit.

Of course, such characters as Bilbo and Sam and Pippin are contrasted with Elrond and Gandalf and Aragorn (for example), all of whom presumably have a much greater and more thorough grasp of the extant maps of Middle-earth. But for a long time I have wondered—and yes, this is entirely speculative—do they consult the same maps as the readers? Over the Christmas holidays this past year I read Creation by Gore Vidal, which is about a Persian diplomat named Cyrus, a boyhood friend of the Emperor Xerxes, who over the course of his life travels from Persia to India, to China, and at the end of his life to Greece. At one point as he consults with the Emperor Darius about his first embassy to India, a map of the known world—etched onto copper shields—is produced. Part of Cyrus’ mission is to map the territory into which he ventures, with an obvious emphasis to be put on trade routes. His description of the maps makes it clear that they are only slightly more accurate than the Babylonian map pictured above.

However, the novel provides maps at the beginning, one depicting the entirety of the Persian empire around 500 BCE, and a detail map depicting Greece and the Greek colonies on Asia Minor. Maps of such accuracy are not of course available to Cyrus. And when we read histories of, for example, the Wars of the Roses or the Roman conquest of Gaul, we similarly have maps that the Yorks and Lancasters did not have; and the Romans were sojourning into (literally) unmapped territory. All of which is by way of observing that, if fantasy is in part a nostalgic escape to premodern, neo-medieval settings, I think it is a fair assumption that Middle-earth’s cartographers were no more accomplished than their medieval European counterparts.

Again, this is entirely speculative: I can no more determine the accuracy of the maps in Rivendell than I can definitively tell you how many children Lady Macbeth had. The point here is more to draw attention to the dissonance between the maps with which Tolkien provides us, and his characters’ experience of the territory those maps determine. (It makes me think that someone needs to write a fantasy novel that unfolds as a series of increasingly-accurate maps, with disputes over their validity and the theological arguments over the shape of the world providing the main conflicts for the narrative).

The point is also the epistemological certainty the maps of various fantasy novels afford. One could argue that a fantasy map isn’t meant to be seen as accurate, that it is in fact meant to be understood as replicating the distortions and inaccuracies of medieval maps … except that I cannot think of any reason The Lord of the Rings or any other fantasy novel gives us to make that assumption. Rather, maps of Middle-Earth, Westeros, Pern, Earthsea, and so forth—take your pick—provide a privileged perspective that is consonant with fantasy’s relationship to history. As Farah Mendlesohn observes in her book Rhetorics of Fantasy, the genre tends toward a scholastic conception of the past—which is to say, like medieval Scholasticism, it treats historical accounts as straightforward fact rather then with historiographic skepticism. However much Tolkien characterized his writing of the tales that would become The Silmarillion (and the countless subsequent books edited by his son Christopher) as “creating a mythology,” in the context of The Lord of the Rings they comprise its history. Beren and Luthien, the voyage of Earendil, the fall of Gil-Galad—all of which we encounter in The Lord of the Rings through song—are not mere myth or legend like Gilgamesh or Odysseus, or legend embellished from history, like the Trojan War, but are indelible history. (In case we doubt their validity, we have such literally immortal figures as Elrond and Galadriel, who were actually around for much of Middle-earth’s “mythic” origins).

The question of history versus myth in Tolkien is one I will return to in a future post. For now, let me return to his maps: I know I am not alone in having been enthralled by the geography of Middle-earth; certainly, the hugely popular multiplayer Lord of the Rings Online game exploits the detailed topography of Middle-earth to great effect (I recently signed up for an account, but haven’t yet had much chance to play—more on that when I have). I unfortunately don’t have anything resembling a proper conclusion to this post—like most of them, this is mostly my musings and little more—but I do mean to return to this topic in the future. Stay tuned.