I’m no expert on German philosophy (or any philosophy, really), but the current state of U.S. politics has come to seem to me a rather spectacular vindication of Hegel’s theory of history.

As I watch the drama of the U.S. government shutdown unfolding, I do so with a feeling of incredulity I’m certain I share with many, if not most, of my fellow Canadians. This incredulity takes a variety of forms, not least of which is the bafflement at the apocalyptic terms with which a relatively mild and definitively conservative form of health care is being described. To listen to Ted Cruz and the rest of his “suicide caucus,” you’d think that what was on the table was a proposal to replace the Pledge of Allegiance with daily readings from Das Kapital.

That’s the larger-scale incredulity. On a procedural scale, the question is, depending on the questioner, “How is this happening?” or “Why has this never happened before?” The latter question is better framed as “why has this never happened in this way or on this scale before,” as government shutdowns have occurred several times in the past, most famously when Newt Gingrich’s Republican-majority House sought to punish Bill Clinton in 1995. The House of Representatives has periodically shut down the government for various reasons at various times, and were that all that was happening now, it would not be as worrisome as it actually is. It is worrisome now in a way it has never been before, because it is emblematic of dysfunction that has been growing at an alarming rate since the Clinton presidency. The answer to the first question, “How is this happening?” is simple: it is built into the parliamentary rules of the U.S. government. The shutdown is only symptomatic: in the last five years, we have seen parliamentary procedure in the form of the filibuster being used more than in all of U.S. history combined (well, OK, not that much—but as the graph shows, it has been used a lot); and for those who have the romantic image of Jimmy Stewart in Mr. Smith Goes to Washington, you should know that actual physical filibusters are rare—the “filibuster” now entails cloture motions, which simply use the threat of filibustering to prevent a motion from coming to a vote. (Ezra Klein explains it much better than I can here).

That’s as far as I’m going to go in explaining American governmental dysfunction, because it’s been hashed out ad nauseum elsewhere, and besides, if you don’t believe me on the face of it, nothing else I’m going to say here will make sense. I will go one step further however and say that, as much as I’d love to do a “plague on both your houses” thing, I can’t. Because it’s the Republicans who are to blame—more specifically, a rump of the party that has receded so far into its epistemic closure that it has become genuinely delusional, and it has the cohort of the party that might otherwise be reasonable running scared.

And so: all of the parliamentary problems built into the U.S. constitution that have rarely, if ever, provided impediments to the functioning of government because lawmakers were too genteel to employ them? They’re now in play. All of the tacit understanding of unwritten rules that has informed executive and legislative behaviour for the balance of U.S. history has been abandoned. I’m no 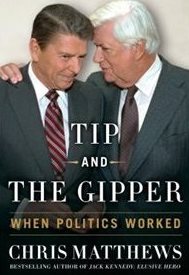 great fan of MSNBC host Chris Matthews—I think he’s a blowhard and a bully whose political inclinations bend toward whatever president sends a thrill up his leg—but he has a new book that interests me about his time as a staffer for Tip O’Neill, the Democratic Speaker of the House during the Reagan years. The subtitle is “When Politics Worked,” and the overarching premise seems to be that politics “worked” back then because politicians observed those unwritten rules—that Tip O’Neill, as Joan Walsh observes, “recognized that Reagan had won a big mandate and ought to be able to enact much of his program—and then be stuck with the results if they turned out badly.” Though ideologically at odds with Reagan, O’Neill was willing to acknowledge the will of the people in electing him, and by the same token let Reagan own the consequences of his policies, good or bad. As has been repeated by many people lately: Obama won the election. The Affordable Care Act has been made law, and was effectively ratified by the Supreme Court. Perhaps, as so many Republicans are claiming, it will be utterly disastrous. But rather than letting that play out, they are doing quite literally everything in their power to kill it with fire.

Which brings us back to Hegel.

My crude understanding of Hegel goes precisely this far: each society at its inception has embedded within it contradictions either invisible or ignorable; but as it develops, these contradictions become more and more glaring, harder and harder to ignore, until they develop into a conflict (which might be violent but not necessarily so), the resolution of which provides a new synthesis … and this new synthesis has its own minor contradictions, which eventually become glaring, and so on. The example I give my theory students when teaching this is that famous line from the United States’ Declaration of Independence: “We hold these truths to be self-evident, that all men are created equal …” And I ask: what are the two problems with this assertion? One, it leaves out women; and two, the author of this document, Thomas Jefferson, owned slaves. The great African-American novelist Ralph Ellison pointed to this when he said of the Declaration that “In the beginning was the word, and in the word was the contradiction.” Almost a century before that, Frederick Douglass wrote one of the most poignant essays in the history of American letters, “What to the Slave is the Fourth of July?”, observing that the great American narrative of revolution and independence was effectively meaningless to an indentured population. It is pretty simple to offer an Hegelian reading of American history: its founding documents contain some pretty profound contradictions, which came to a head in the Civil War; the resolution of the Civil War, with the indignities of Reconstruction and implementation of Jim Crow, was far from perfect, and brought about a new set of conflicts with the Civil Rights Movement. Each time there were improvements, moving the U.S. forward, but also the seeds of new conflicts and problems.

In this vein, it is difficult to not see the antipathy of Tea Party conservatism as the most recent manifestation of these contradictions. The election of Barack Obama was seen by many (myself included) as a moment of both historical and symbolic closure; my favourite editorial cartoon after the election was by Tom Toles, which featured Obama walking up to the White House under the Declaration’s assertion of all men being equal, with the footnote “Ratified November 4, 2008.” At the same time however, the lingering unresolved racial divide in the U.S. was exacerbated by Obama’s election—and however much Fox News and their fellow travelers howl in outrage whenever one of us lefties plays “the race card,” the particularly vicious vitriol directed at Obama has edged into race-baiting too often—and the Tea Party right is far too monochromatic—for it to not be based at least in part in unreconstructed white panic.

That being said, the implicit and explicit racism underlying the backlash against Obama is just one of the contradictions being exacerbated by the present conflict. What underwrites the current legislative showdown, as I suggested above, is the fact that the system has provided the means for a stubborn and uncompromising minority to bring the government to a screeching halt—and if the debt ceiling is breached, it won’t just be the government. Hopefully I’m not overextending the metaphor too much when I characterize this as a perfect Hegelian storm, wherein the social and cultural contradictions have managed to employ the systemic contradictions. One way or another, I find it difficult to imagine that the U.S. government is going to look the same when all is done … my lefty heart is gladdened to see that Obama et al seem to be determined to hold fast, come hell, high water, or default, having come at last (I hope) to the realization that any compromise now only leads to further hostage-taking in the future (as it were).

The problem (one of them) with Hegel however is that he has a pretty relentlessly upbeat conception of history as inevitably progressive. The “syntheses” emerging from conflict, he suggests, are invariably positive … perhaps this is my deficient understanding of his work, but I don’t think he tends to account for the possibility of devolution, or a new synthesis that resolved previous contradictions in a negative or regressive manner. Andrew Sullivan, one of my favourite political bloggers, says again and again that the current Republican party should be ashamed to call itself conservative, as they are anything but. As he says in a recent post, “[Republicans] are the real Alinskyites and Obama is the real conservative,” i.e. Republicans have become a party of radicalism and revolution, the antithesis of traditional conservatism. I agree with that to a point, but beyond that point I think the radical Republicans are quite literally ultra-conservative: they demand stasis, absolute and paralytic cultural stasis, but want it to be of a sort they imagine to have existed fifty or one hundred years ago. Or possibly even before that: the rollback of gay rights, civil rights, the New Deal, scientific advances, and general social progress they seem to desire is really nothing short of terrifying.

And who knows? The direst predictions about breaching the debt ceiling say it will precipitate a global economic meltdown; in my more cynical moments, I wonder if the suicide caucus is genuinely suicidal, desiring precisely that kind of crisis, which could

potentially dissolve the federal government’s authority and fracture the union. Perhaps I’m being overly bleak, but then, as someone steeped in dystopian fiction, my mind has some well-trodden pathways it can take. The novel that keeps popping up for me now is Richard Morgan’s Black Man, which I wrote about on my old blog, and which I taught in my SF class last winter. In his imagined future, the United States has fractured into three parts: the Union, which is closely associated with the U.N. and Europe, and which comprises the northeastern states; the Rim States, the western states on the Pacific, which have entered into a loose federation with the rest of the Pacific Rim; and the Republic, the main swathe of Middle America, what we would call “Red States.” In the novel it also goes by the derogatory name “Jesusland,” and is precisely what that name suggests: a theocracy that rejects evolution, gay rights, women’s rights, where teaching creationism is the law and abortion a felony.

At times like these, it’s hard to think of Morgan’s vision of the future without feeling a little shiver of recognition.