Of Mixed Tapes and Deck Renovation 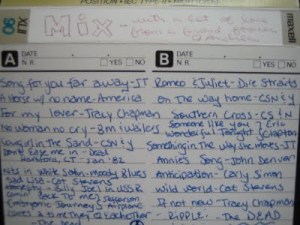 Warning to young people: this post deals with old technology, and the vaguely luddite maunderings of someone who has found reason to be nostalgic about it.

I’m currently ripping up my back deck so I can rebuild it, something that is at least two years overdue. Next door, my neighbours are having the clapboard on their house replaced and repainted. Actually, they’ve been having their clapboard redone for almost a year—their last contractor did the contractor dick move, i.e. left the job half done and never came back, except (finally) to reclaim their decrepit scaffolding. Now they have a much more conscientious bunch working on their place, which seems to be a family affair—at least three generations represented.

Seeing them work makes me remember my undergrad summers, when I worked for my uncle doing painting and reno work. And today as I worked ripping up my deck, while they did their thing painting and nailing in clapboard, I remembered that staple of summers past—my mixed tapes.

This is one of those generational things … it has occurred to me more than once to photograph my iPod Nano, which is precisely two and a half centimeters square and about five millimeters thick, beside stacks of ninety-minute tapes that would approximate the amount of music my pill-sized device contains. Which is to say that that I have more music at my fingertips—by a magnitude—than I had in my teenage record collection at its apogee. Prior to working on the deck, I attacked the jungle that my backyard tends to become in the summer with my weed whacker while listening to one of my playlists—and in the process realized that “Gagnam Style” is actually a pretty awesome song to do yard work to (a discovery I of course posted to Facebook and Twitter as soon as I took a break).While I had lunch, it occurred to me that I should make a dedicated “deck destruction playlist,” which I did … and which took me all of ten minutes to do.

Please understand: when I worked for my uncle, I had dedicated mixed tapes that I’d listen to while I painted, tapes that were specifically designed to see me though an otherwise tedious day of edging rooms or painting siding or rolling out ceilings. Each tape marked out ninety minutes of the day, and each was calibrated to a given mood. Was I mellow that day? Irritated? Hyper? Did I feel like punk, or grunge? Was it a Pogues kind of day, or U2? Of course, things could change. A day that started with me feeling angry and angsty, necessitating some Rage Against the Machine and Front 242, could change if my fellow painter was in the mood to smoke a joint on our break … at which point, Bob Marley would become the order of the day.

The point is that I was obliged to have backups in my bag. And all of those mixed tapes necessitated a certain investment of time and thought. As did all mixed tapes: even the most casual of mixes meant spending the time to sit beside the stereo stopping and starting the tape as you recorded things. And when you were making a mixed tape for someone? Well, that was another order of thought and effort entirely.

By contrast, the creation of my deck destruction mix involved plugging my iPod into my computer, scrolling through my library, and transferring songs that seemed appropriate. Then there was an added minute or two of arranging the order, and done! I had my music.

For the record: I do rather love this brave new world of technology. I’m not complaining. My iPod is my favourite device, if for no other reason than it makes running a palatable exercise. All of this would not have occurred to me today were it not for the guys working on my neighbours’ house, reminding me of my own time spent similarly occupied. But I will admit to a vague sense of loss, which I suspect I hold in common with those who watched the 8-track eclipsed, with those who watched television supersede radio, with those who saw the printing press proliferate through Europe (because the transition from mixed tape to MP3 is almost exactly the experience of the monastic scribe watching the Guttenberg revolution).